Not a million miles away from Covilha (a town which I’ve also covered here on UKB in collaboration with Urban Art Porto) Vigo’s urban art scene makes the trip to northwest Spain a worthwhile one.

I spent a few days in the Galician capital and got to grips with it’s expanding mural and grassroots scene, its hilly landscape, and wet spring weather (in between cerveza and pulpo stops) to track down some of the best art Vigo has to offer.

Most of these can be seen in the one walk, however, you might want to break it up with some other sightseeing, or tapas stops to keep energy levels up. There’s a decent bit of city hiking to be done, so make sure you’re fully fuelled.

(Side note: my recommendation is to head for the chaotic “Taberna A Pedra” in the old town. Menu is all in Spanish so have Google Translate at the ready)

While this walk takes in a good spread of the city’s murals, the full list can be found on the city council’s website that shows you exactly where some of the most impressive mural’s from the Ciudad de Color festival live.

If staying in the middle of Vigo’s old town, or Casca Vello, you’ll need to walk for roughly 15 minutes to this first stop, skirting around the edge of Vigo’s awesome coastline. This is a really apt first stop, and features two pieces side by side from local artists Fernández y González and Federico Draw.

Both artworks were commissioned by the European Fisheries Control Agency to spread the word about their main aim – ensuring ocean sustainability over time.

Fernández y González’s work is on the left, showing an underwater scene from the Rías Baixas, while Federico Draw’s piece entitled Pescadero or Fishmonger is a portrait of one of the many fishmongers that have made a living from the spoils of the Atlantic ocean. 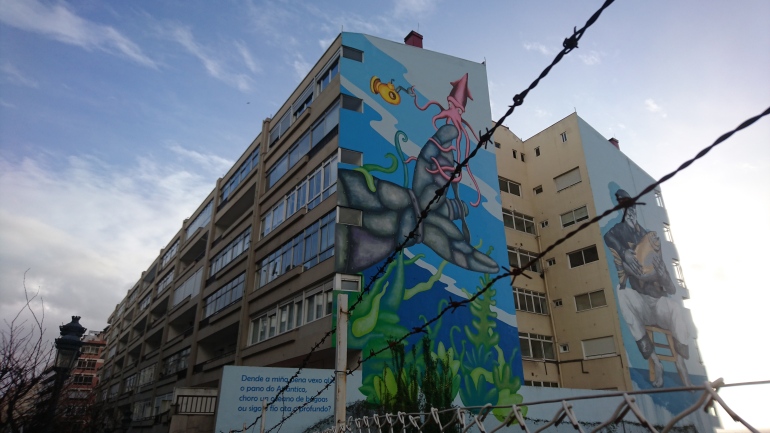 
A short walk away from Rúa do Conde de Torrecedeira you’ll find another two artworks sitting close by each other.

The first, a smaller shutter by an unknown artist (any clues – feel free to drop them in the comments) portrays a jazz guitarist in a style that fits the business it protects, local recording studio, Estudios Musicales Metropolis.

Adjacent to this lies a spectacular piece from José Miguel Sagüillo drawing once more on the maritime and fishing connection, with fishing boats and the beautiful nearby Cíes Islands. 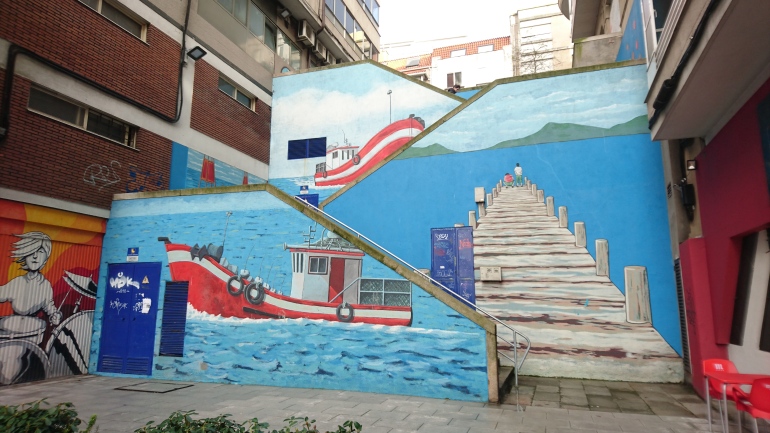 While these last 4 pieces have been in place for quite some time, Rúa da Falperra is a more transient space. This particular work may not be in place, but there’ll undoubtedly be something else on these walls, making it a worthwhile stop of this self-guided tour.

This piece caught my eye in particular on the walk up to the top of O Castro (a great hike, spectacular views over the city and a pretty peaceful place to escape the city centre for a while).

The pastel green and pink combo is one I really like – these sort of innocent childlike colours are in stark contrast to some of the messages in the painting. 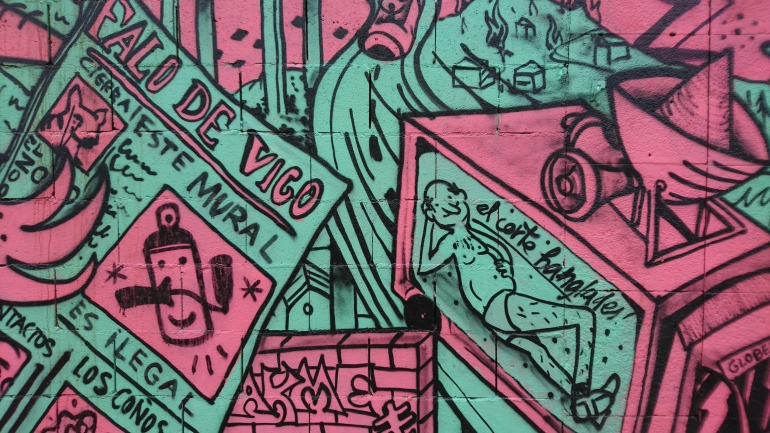 The newspaper reads “Phallus of Vigo” with the headline “Close this mural it’s illegal”. The famous dinosaur tree has been beheaded, and the delivery truck reads Il Corte Bangladesh – a play on the famous Il Corte Ingles department store. Generally a portrait of a decaying and debauched Vigo!

Not sure exactly what to make of it all if I’m honest!

But my reading of this is that it’s an ironic look at anger over graffiti and graffiti artists who are being vilified unfairly? What’s your interpretation?

This one is a little tricky to find, it’s nearby a playpark and children’s cycle path, stick with it though as the Gondomar born artist’s paint is worth the hunt. 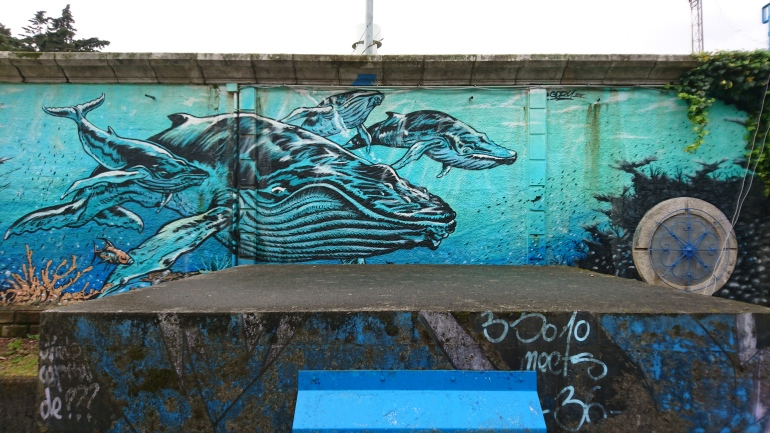 Descending a little further into Vigo and in the direction of the Casco Vello, make sure to drop by Nelson Villalobos’ triptych style mural on this busy stretch of road.

His work flows between cultures – Afro-Cuban, Egyptian, Latin American, Peruvian among others – and takes inspiration from masters like Picasso and Matisse. Have a look and see if you can spot those influences in this piece. 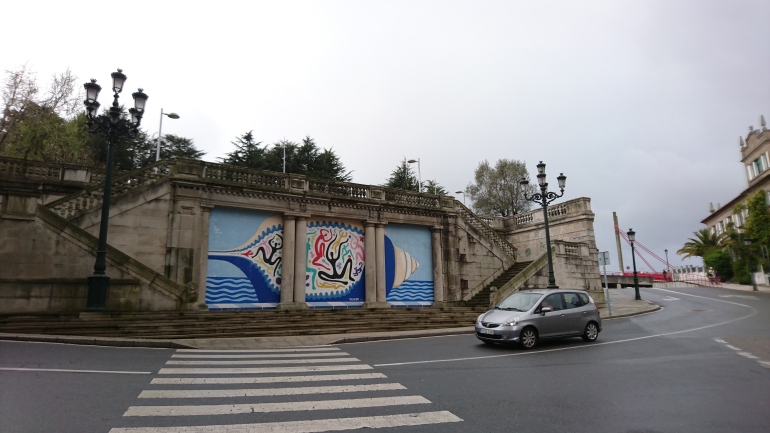 Berta Cáccamo’s abstract mural is also worth making the effort to find, it too is a little tough to find thanks to Vigo’s haphazard layout, not too dissimilar from the Old Town of Edinburgh. By using the elevators that connect Praza Porto do Sol and Rua Abeleira Menéndez you’re sure to find it – almost at the top.

His enormous paint splash and clean drip lines stick out among the old town buildings, especially so on a grey and wet Galician day, like the one when I swung by.

Swing by the waterfront opposite the AC Hotel (basically Vigo tourist ground zero) for a couple of nice wildstyle pieces – again standing in stark contrast but this time with the surroundings of Vigo’s port.

This feels like a fairly ephemeral piece, less organised than the previous murals, so there might be something completely different if you drop by in future. Hopefully it’s a spot that remains under control of local artists, however! 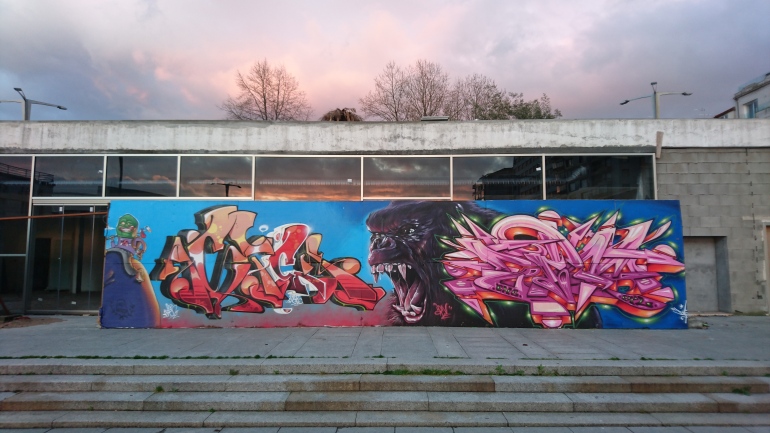 After a hike past Vigo Urzaiz train station, get ready to be rewarded with probably the most impressive mural in Vigo, or at least on this itinerary, courtesy of Elisa Gonzalez.

Vigo’s tourism body has titled the Galician town as the “Ciudad de Color” and Gonzalez’s mural perfectly sums that up. Her community of characters of different shapes, sizes, genders and backgrounds dominate this part of Vigo’s skyline. 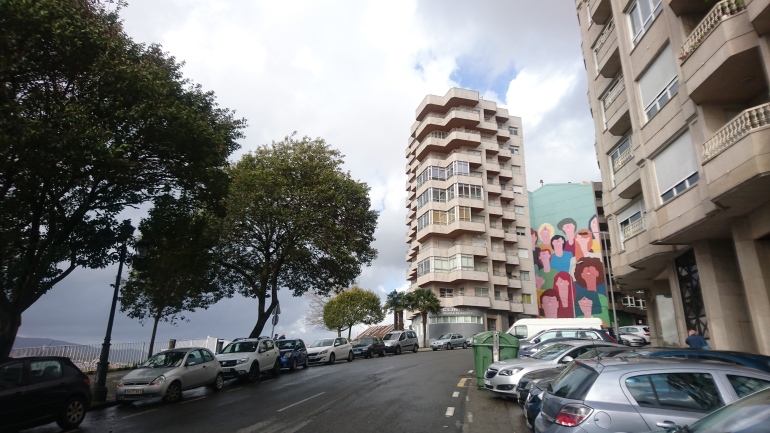 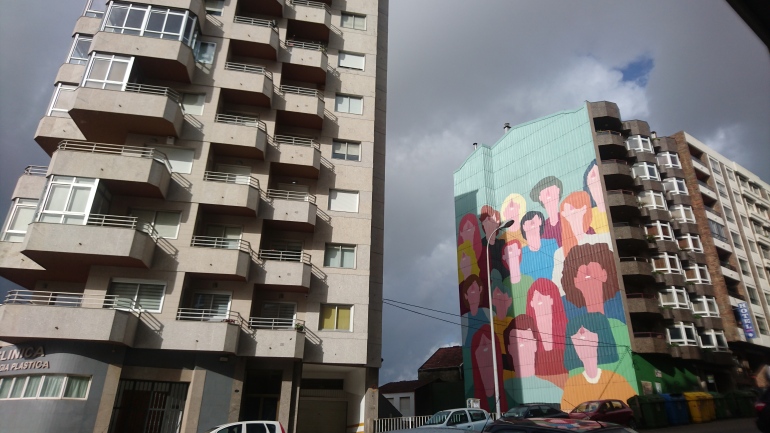 As mentioned, these are just some of the stops to check out Vigo’s varied art scene. The local council’s art map is a really handy resource, and while it can be tricky finding the murals, you’re definitely rewarded for your persistence when you do eventually catch a glimpse.