In March 2012 the people of Kenya’s capital city, Nairobi, woke up to discover a large mural painted on a city wall along Muindi Mbingu Street by creative activists with a political message. The mural showed a Kenyan member of parliament, depicted with a vulture’s head, wearing a black suit and sitting on an expensive chair. Around the vulture-headed lawmaker was a list of social and economic problems that plague Kenya, such as ethnic discrimination, corruption, land grabs and famine. Below the piece were the words; “MPs screwing Kenyans since 1963”. 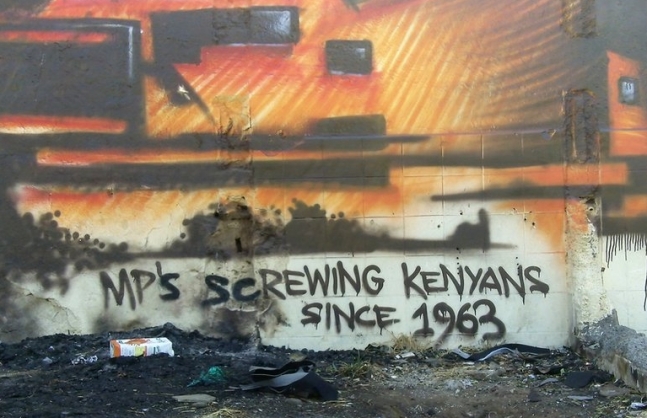 This was first in a series of murals that appeared in key locations across Nairobi loaded with calls for responsible and accountable leadership in Kenya. Filled with caricatures of the ruling elite, the murals target greedy and corrupt Kenyan politicians. This is street art with a strong message, meant to rally Kenyan citizens to use their votes in the elections next year in order to bring about a real change in their society.

A high number of Kenyans live in poverty and Nairobi is home to the second largest urban slum on the African continent, Kibera. Yet the members of the ruling elite, upper and middle-class live extravagant and lavish lifestyles. The murals reflect popular dissatisfaction with the ruling class and represent a hope for a future with reliable leaders. They call for an end to the egocentric ruling class. The murals caution Kenyan citizens against ethnic rivalry and tensions, selling their votes, or allowing themselves to be manipulated by the power-hungry corrupt elite. They are heaped with challenging content. 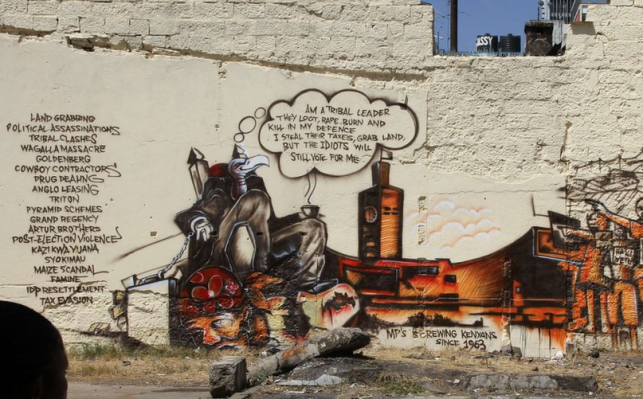 So far, the artists behind the graffiti have largely remained anonymous. Perhaps the only identified person who works behind the scenes is Boniface Mwangi. Mwangi is an award wining photo journalist who has interestingly been banned from Facebook for apparently being too politically outspoken. He has also has won the CNN Photojournalist of the Year award.

Mwangi documented the violence that shook Kenya in 2008 after the highly disputed presidential election in December 2007. He witnessed neighbours of different ethnic groups who had previously lived peacefully side-by-side turn against each other. This experience may have been the turning point that drove Mwangi into political activism. Afterwards, he founded Picha Mtaani, an organisation aimed at contributing to community reconciliation after the post-election violence. He has referred to the members of parliament as “scavengers”.

With the help of various connections and friends, including German graffiti artist Markus Quinting, also known as Tona, Mwangi and the anonymous group of artists launched the street art project. The artists work at night, completing works that usually take weeks to finish in only a couple of hours. They draw caricatures and paint slogans targeting members of parliament at traffic lights on major streets. Their art draws significant attention from crowds the following day.

In Kenya, like elsewhere, it is illegal to deface other people’s property yet property owners will not have to worry about cheap landlord insurance with the government cracking down on the graffiti. Within 24 hours, the first mural was covered up with blue paint by officials from the City Council. Mwangi was summoned by the police but was promptly released.

Mwangi believes his project tell the stories that the mainstream media ignores through using art to speak to and for the people. Perhaps unsurprisingly, the murals gained almost immediate attention and got people talking. The majority of the citizens agree with the message of the murals, regarding them as truths that have been kept silent for long enough. The general opinion is that when the common people speak, the parliament never listens. On the other hand, some members of parliament have called the murals unfair, overly emotional and lacking facts and critical analysis of the role Kenyan members of parliament play. With the parliament paying attention, perhaps the graffiti are speaking in place of the common people.

More murals have come up across Nairobi, drawn in locations where crowds are known to pass by or gather, and where politicians on their way to parliament will be sure to catch a glimpse of the latest work targeting them specifically.

This article was written for urbankulturblog (UKB) by guest blogger ‘Jenny Bouquet’. Photography from the BBC.