Over the past few months I’ve talked quite frequently about the street art scene spread across numerous Latin American countries, with big hitters like Buenos Aires (Argentina) and São Paulo (Brazil) producing artists, and artwork, of an unbelievable quality. 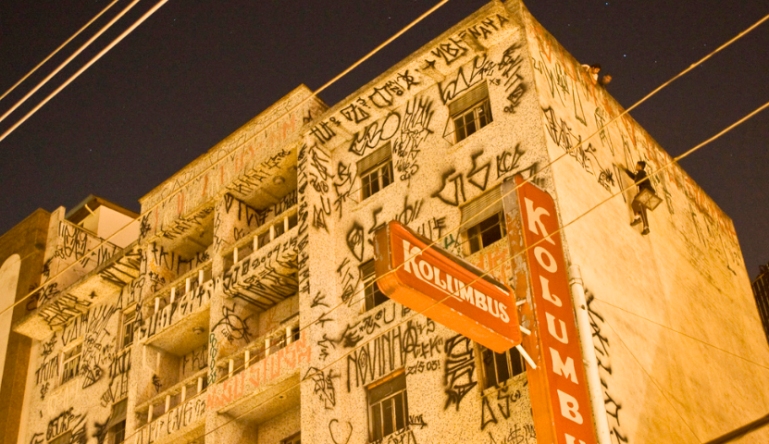 A long way from pixação  (above), the political slogans daubed on walls and buildings that defined mid to late 20th century São Paulo, the art that has established the city as a big-hitter in international street art is often no less political, but more accessible to those looking in from the outside.

From small walls to enormous murals, the colourful artwork seemingly more vibrant due to its  surroundings, mirrors what I think of the continent as a whole. Huge, colourful, unashamedly forthright, and with contrasts and contradictions at every turn.

I picked a handful of artists, some well-known and others not, that I think show the depth of art coming out of this massive continent. From Tijuana to Tierra del Fuego…

Hyper-realism meets surreal, takes a 3-day bender and winds up on a park bench round the back of a Netto in Middlesborough. Or at least that’s what some of Martin Ron’s latest artwork feels like, and it’s absolutely fantastic.

Charting some of his earliest paintings (a mural of Carlos Tevez) and comparing it to his most recent large scale piece, coincidentally at the Village Underground in East London, you can see quite a distinct difference. This latest piece is in response to the badger culling in the UK, but refuses to take a direct route.

Instead insists on a detour via a torso, entwined with some antiquated machinery (a common theme throughout his work), operating an enormous  female mechanical hand, mimicking a gun, shooting a badger. He calls it David and Goliath. Yes, David Cameron…

Julian Pablo Manzelli, known in art circles as Chu, played a key role as part of the DOMA collective in Buenos Aires, that helped define street art’s position within the city as a tool for regeneration.

With a background in graphic design and animation, Chu used his friendly cartoon characters in bold eye-catching colors alongside a childlike simplicity to engage the public, and demonstrate the power that street art has a role to play in transforming public spaces. While he continues to develop these colourful characters on the street, his studio work has spun off in a more abstract direction, geometric shapes form the basis of this collection of work.

I think these innocent, almost naive, paintings are most profound when nestled in a ramshackle environment, the contrast of innocence and the often harsh realities of life. 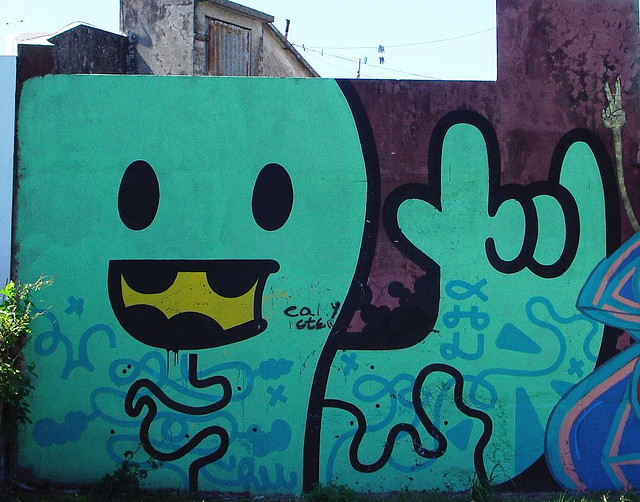 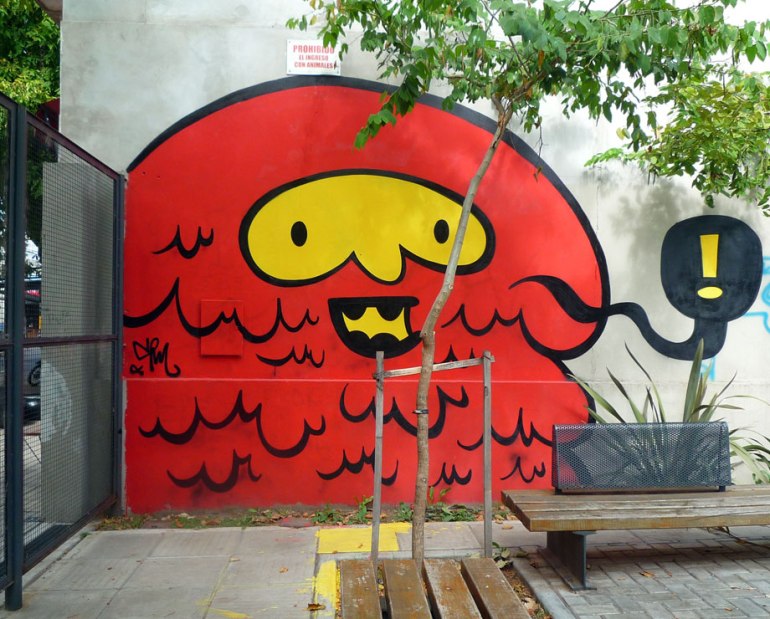 I’ve talked a lot about the vibrant colours of South American street art in particular, but for Alex Senna, colour is not a factor. The majority of his art work on the street is monochrome, but with a flat colour background.

There’s something almost Disney-esque about his work, but with a Latin tint. I can’t quite put my finger on it, but I think it’s something to do with the way he paints the faces of the characters, particularly the eyes… 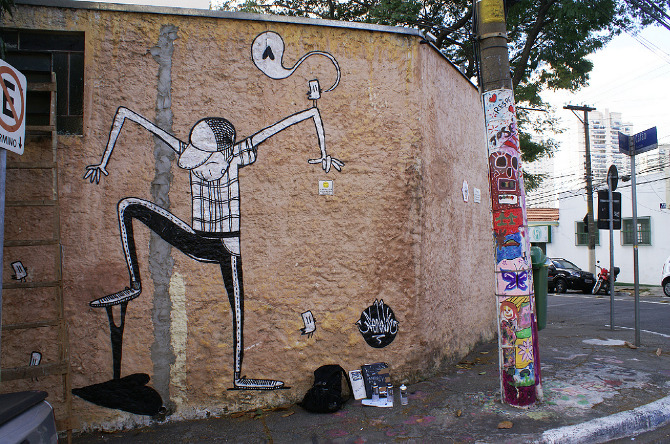 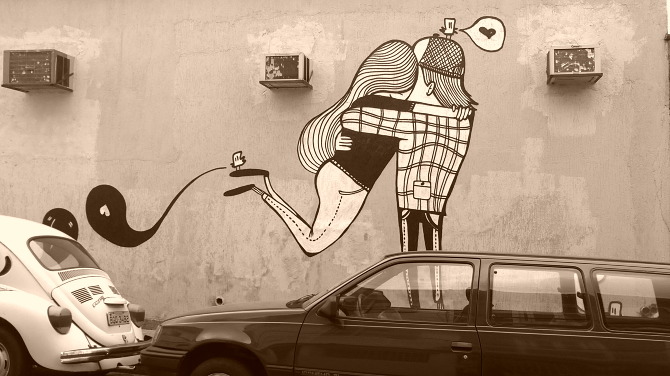 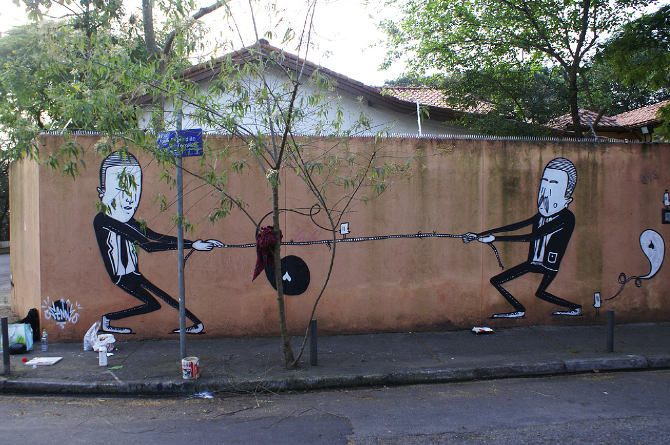 Probably my favourite artist at the moment. Proud Mexican, and Mexico City resident, his passion for his city and country is evident (check this recent video) along with his love of the indigenous cultures of Mexico, which have had a huge influence on his work. Not only great pieces of art, they really capture something of his home country within them.

Whether it’s the unnerving signature masked characters, the symbolism behind some of the pieces relating to South American traditions, or the Cinco de Mayo style skeltons, I can’t get enough of his work at the moment.

In addition to all of this he seems to be a pretty likeable character having watched his recent MOCAtv interview. – remember to check out some of his studio work too, really worthwhile seeking out for another angle on his work. 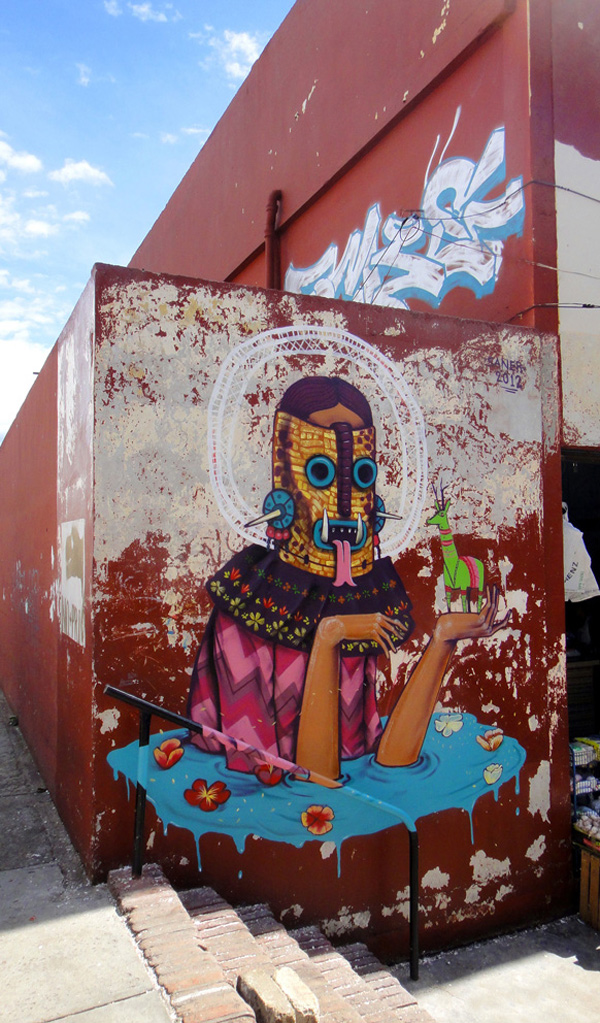 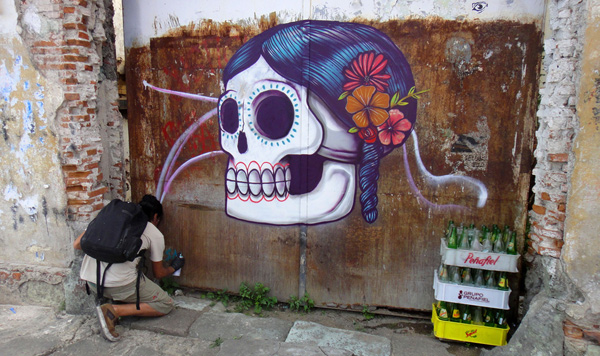