I’ve not blogged for a week or two, but have had this one in mind for a while. Having heard a few months back about this mural, I’ve really been looking forward to the outcome. And just a week or so ago, JBAK completed the truly enormous mural in east Berlin off Landsberger Allee.

The guys completed this work in association with LOA (Lichtenberg Open Art) & HOWOGE, a housing association in the city, and is the direct result of a pretty stressful sounding application process.

Karl explained that following their initial acceptance, their first presentation of what they had in mind didn’t get the reaction they’d hoped for. “It did not go well, we left discouraged and feeling all the holes to our artwork for this project”.

But having done enough to persuade the organisers to chase for a revised plan, the pair went back, addressed the requests from the organisers and sealed it. Now just to paint all 32m of that bad boy…

It wasn’t plain sailing by the sounds of things. 12-14 hr days, 6 days a week, for 4 weeks. Oh, and chuck in a handful of lift breakdowns just to make things interesting.

The mural takes aspects of James and Karl’s individual work, as always, but this time there was a really different look to the piece. Maybe there’s more bright colour involved this time? With that sort of high contrast, saturated look highlighting some of the aspects of the bodies it almost looks as if the top layer of skin has been removed to reveal the colour beneath.

I can’t quite put my finger on it, but it looks different. Different but still great!

Anyway, enough of the chat, check the flicks from Just and Karl below. Let us know what you think! 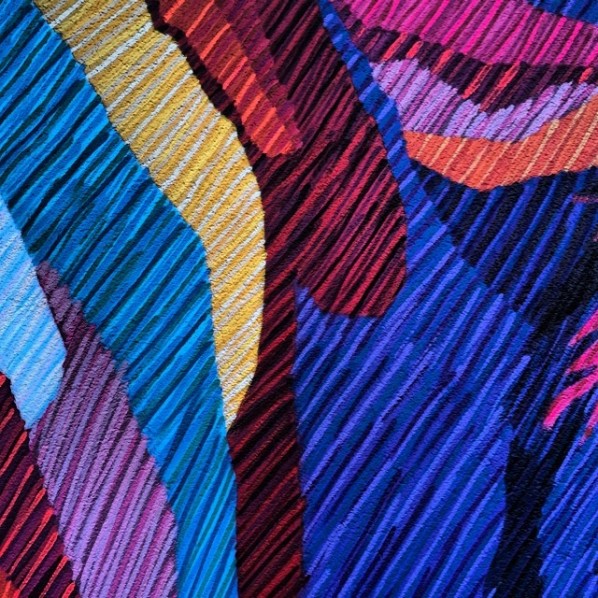 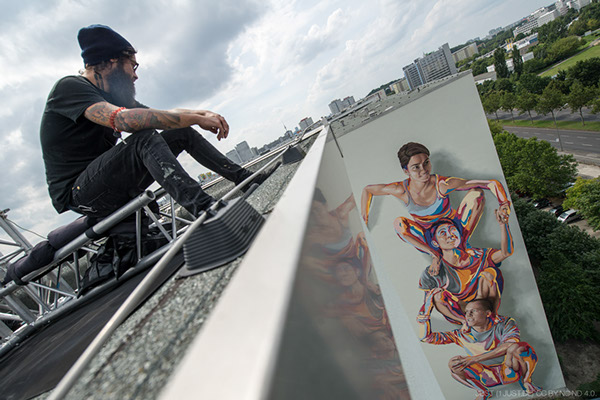 Karl taking in the finished mural

Hi everyone! 👍🏼 . It's been a while since I've posted - have taken an extended break having worn myself out a bit at the end of 2018. . Update below, TL;DR - UKB is on indefinite hiatus. . ------ . I've been writing this blog since 2011, and it's helped me learn a load of new things, taken me to see amazing places I probably wouldn't have seen otherwise, drawn me to meet some really cool people and given me a heap of inspiration for my own stuff over the past 8 years. . For a number of reasons I felt like I wasn't creating the same content I had been, and for a while it had become more of an effort than it should be. . And when something that is meant to make you happy begins to become a chore, it's time to step back and stop ploughing on regardless. . Anyway, the point of this fairly hefty self-indulgent post is to say that I won't be posting here, writing the blog, or recording any more podcasts for the foreseeable future. . Ending on 50 mixes seems a nice way to go out! . But I'll be keeping this page as a record of the things I wrote about, paintings I took pictures of, and of the amazing folk who gave me their time and who helped me out along the way - thank you very, very much to you all! . 'til next time... . Steven UKB
Another throwback to being in #amsterdam. Around the back of a warehouse building while trying to find @pllek_amsterdam! . Artist unknown - you know what to do folks! 🙌 . . . . . . #streetartiseverywhere #street #streetart #art #graffiti #netherlands #explore #travel #creative #inspiration #urbex #mural #urban #urbanart
Another snap from a recent trip to #amsterdam - @Vyalone over at NDSM Werf! 👀 . Lots of great work over there if you're visiting, we'll worth the trip over to take a wander around! . . . . . #netherlands #art #abstract #graffiti #street #streetartiseverywhere #streetart #instablogger #instaart #colour #paint #painting #ndsmwerf #holland #noord #design #eye #urban #urbanart #publicart #mural #muralism #muralist
@tennents.lager brewery mural in Glasgow of the "Lager Lovelies" who used to be a feature of the Tennents beer cans, but obviously no longer are - for many reasons! . Cool mural in a sequence that were recently painted or restored by @conzo_throb at the brewery! . . . . . #street #streetart #streetartiseverywhere #tennents #beer #lagerlovelies #design #designer #mural #can #beer #beercan #glasgow #scotland #art #portrait #travel #instadesign #instaart
The latest Smug mural in #glasgow, painted a couple of months ago but only recently snapped it. Pretty good eh? . . . . . . #streetart #streetartiseverywhere #art #artist #portrait #mural #design #people #peoplemakeglasgow #scotland #travel #publicart #urban #urbanart
Another snap from 🇳🇱 at NDSM Werf. One of my favourites, @dripsndots with that distinctive rectangular style! . . . . . . #amsterdam #ndsm #ndsmwerf #street #streetartiseverywhere #streetart #design #spraypaint #painting #urban #urbanart #contemporaryart #character #cartoon #dotsy #travel #traveling #europe #netherlands
Great to take a quick look at the ongoing work at #ShocktheDock jam today. Another great event at @marineparadegraffitiwall here in #edinburgh! 👊 . . . . . #streetart #leith #scotland #art #artist #paint #painting #streetartiseverywhere #urban #urbanart #character #halloween #spooky #leith
🇳🇱 Spent a day in Amsterdam and caught some nice work at NDSM Werf. Most spectacular definitely this piece from @kobrastreetart of Anne Frank. . . . . . #streetart #art #mural #colour #paint #painting #colourful #urban #urbanart #ndsm #mdsmwerf #community #artist #building #warehouse #amsterdam #travel #traveling #europe #holland #netherlands #annefrank #history
Excellent mural stetching quite a bit off Abott Kinney. . Artist - @EricJunker . . . . . . #street #streetart #art #design #graffiti #mural #urbanart #blackandwhite #bandw #animals #designer #LA #travel #venicebeach #venice #losangeles