An emotional and powerful re-imagining of Grit, Martyn Bennett’s final work and a landmark of Scottish dance and folk music, arguably became the highlight of the 2016 Edinburgh International Festival programme. 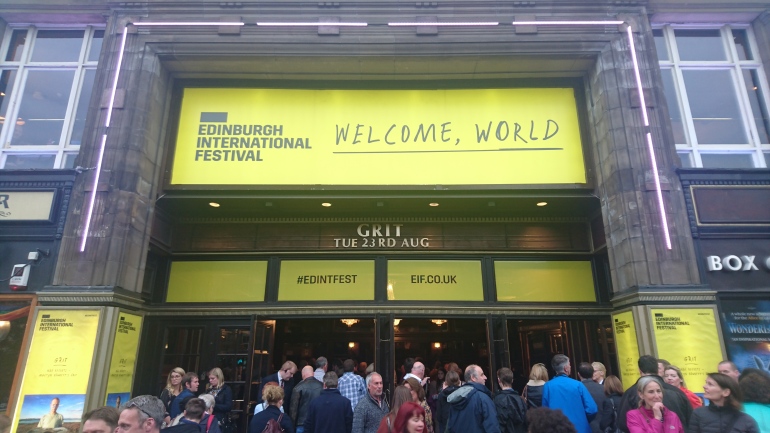 Martyn Bennett’s legacy of dance-infused Scottish folk music pulled folk music away from the traditional “misty-eyed” picture that once sprung to mind. His final project before succumbing to the Hodgkin’s Disease that plagued him for over three years, pushed boundaries far beyond limits others were only willing to dream about in the early 2000s.

By twisting heavy dance orientated beats around samples of various Scottish travelers and Gaelic west coast singers, it was a liberating and beautifully uncomfortable departure from traditional Scottish folk music. Groundbreaking in the truest sense of the word.

Martyn described the work, generally agreed to be his most mature as a producer and musician, as “offering an alternative to those who think that traditional music is being spread thin amongst urban trendiness”. Ten years on it does so much more – it brought the old to the new, and in doing so became a permanent marker in the landscape of Scottish music.

In the documentary Grit, Martyn went on to explain, “musically I like to find contrasts, I like to go from something quite serene and suddenly burst in with something that shakes the rafters”.

“Grit is about real voices, real people, real lives” further explained Bennett, no more so than his own life, having once described his cancer as “a piece of grit inside your soul which you can’t get out, so you have to try and make something of it”.

“Grit is about real voices, real people, real lives” further explained Bennett. A real life no more so than his own, having once described his cancer as “a piece of grit inside your soul which you can’t get out, so you have to try and make something of it”.

Bennett’s collaborator and friend Greg Lawson took on the challenge of translating his masterpiece into a live orchestra production, recruiting an A-team of Scottish musicians to give it the full works.

This is Scottish music’s answer to the re-imagining of Goldie’s Timeless by the Heritage Orchestra.

Three thousand festival goers squeezed into the Edinburgh Playhouse and were given a stunning performance by Lawson and his assembled orchestral dream team. Staying true to the album the performance worked through the tracklist, recreating the often manipulated sounds organically and with incredible accuracy. Sheila Stewart’s warbling vocals in Move performed by Fiona Hunter and Annie Watkins in Nae Regrets performed by Karen Matheson, helped piece the Grit story together perfectly before our eyes…and ears.

The savage bassline of Chanter was powerful and at times emotional to witness performed live. With a mixture of percussion and brass instruments giving the ‘oomph’ needed, heads were bobbing in the crowd and more than a few feet itching to get up and start moving. It felt like the majority of the stalls were using all their might to remain seated, ready to pile on down to the front. Spoiler alert – the encore featured Chanter again and the second chance to get on our feet wasn’t missed!

In place of the late Michael Marra, Scottish actor and voice artist David Hayman took on the recital of the translated Psalm 118 before momentary silence launched us forward into an explosion of noise, and fired headfirst into the meat of Liberation.

Greg Lawson’s ace was giving the crowd an insight into Bennett’s unreleased track Paisley Spin which was earmarked for the album. Interestingly the track sampled Gerry Rafferty which came under scrutiny from his people. To wriggle out from this potentially uncomfortable confrontation, Martyn had tried to convince him and his lawyers that it was actually himself impersonating Rafferty!

I’m not sure if it’s an indication of Bennett’s strong talent for curating an album or shrewd legal head for not entering into an unwinnable copyright battle…!

Overall an emotional and powerful evening that predictably had the crowd hoping that Lawson would skip back to track number 1 and start over again. It wasn’t to be sadly, but the memories of this performance will certainly live long in my memory.