Barcelona might be the first stop on a street art hunt in Catalonia, but travel less than an hour north and you’ll be rewarded for your adventurous nature with Girona’s explosive mural scene.

Thanks to the ongoing Milestone Street Art project many of the city’s urban areas, including a special pedestrianised pathway that skirts the edge of the old town, are decorated with the creativity of the world’s most talented.

There’s certainly enough to fill a day traversing Girona’s compact town, in among stops for necessary fuel (beer and tapas) but also ample time to make the most with a day trip from Barcelona if that’s where you’re based.

Girona’s home to more than a few pro cyclists meaning bike hire for tourists is plentiful and makes for a great way to catch a sight of some of the larger scale pieces slightly beyond the inner city limits.

Everything on this particular tour can be easily seen on foot.

Print this one out for the tour, or use this google map to get you on your way! 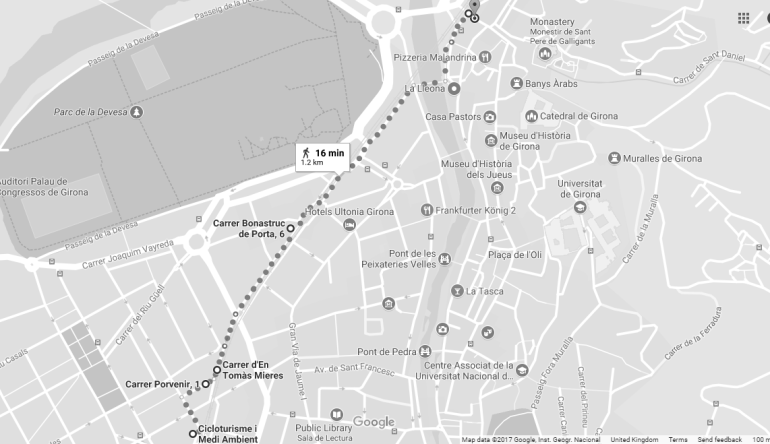 Start your journey over the road from locals Cicloturisme i Medi Ambient bike hire, particularly if you’re in the mood to pick up some wheels to explore a little further and speed things along.

This first piece is tucked away on a shutter off the main Carrer d’En Tomàs Mieres/Carrer Bonastruc de Porta drag, but the colourful work from Pau Morales was enough to catch my eye and take me off track momentarily.

The Catalonia-based artist’s jazz inspired piece reminded me of the statue of Miles Davis outside the Negresco Hotel in Nice, and is an excellent example of what I love about Girona’s scene.

Heading north from here you’ll pick off some of the best pieces Girona’s got on offer – first up 3TTMAN – pronounced “Trois Têtes Man” – which you can see in this piece. Most likely spotted painting his flat, playful characters around Madrid, his other talents include videography  and photography.

A creative vortex of a man who, in his own words, combines “the punk heritage of graffiti” with strong influence “popular religious art”. Keep your eyes peeled for the three-headed man!

From here, it’s an easy downhill stroll (or roll) through a gallery of some of Europe’s best urban artists. Cyop & Kaf‘s work occupies a number of pillars on this route and are well worth your time.

Their work is super minimalist, and really enigmatic. They seem symbolic, for instance the piece of the figure hanging onto a rope inside the head of a man made me stop and think. Is it a comment on mental health? Talking about being trapped with your own thoughts? The battle to get our of your own head?

The rest are similarly intriguing – and demonstrate that a piece needn’t be artistically complex to be powerful.

Heading on a few more steps, keep yourself on the left hand side to catch the work of 108.

His abstract shapes have developed out of a graffiti education, but having bored quickly of the scene, the Italian artist was one of the first European post-graffiti artists to work with abstract forms, painting large and mysterious figures that invade abandoned spaces (and occupied ones) like this. 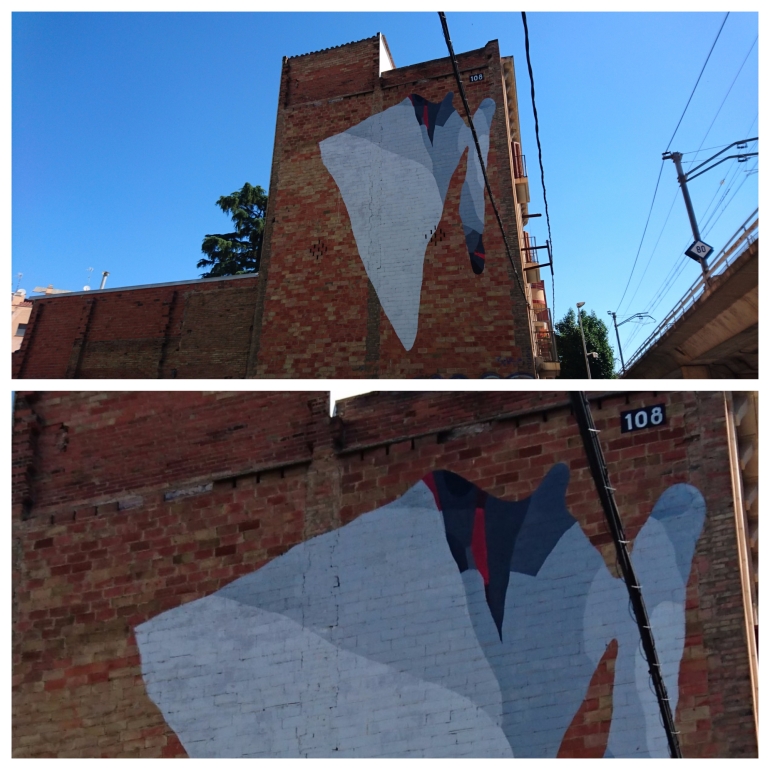 I first discovered Kram‘s work on a trip to Barcelona in 2015 at the Jardins de les Tres Xemeneies, and became a huge fan of his cartoon-like style that he applied to his animal figures. They look childish, in terms of theme (not technique) at first glance, but the content is often for adults only.

His work also appeared in my street art tour of Covilha, put together with my friends at Urban Art Porto, and Barcelona.

Erica Il Cane‘s works is on just a little further on the right hand side and is probably the largest urban art mural I’ve seen in person. It’s titled “Cocollona” and comes with a fascinating folkloric story.

The Cocollona is a river monster of Gironian mythology. According to legend, she was once a nun who was punished and imprisoned in the dungeon of the city’s monastery due to her lack of faith. She could only leave to go to the river that runs through the city, the Onyar.

Due to years of isolation and malnutrition, she grew scales until she eventually turned into a crocodile-like creature. In spite of the punishment, she was still considered saintly, which was shown by a pair of butterfly wings.

Dive off into the underpass to catch the work of fellow Brit, Lucy McLauchlan.

Lucy describes her work as having a “deep respect for nature” drawing inspiration from the environment she paints in, “allowing it to inform and direct what is an intuitive and explorative process”.

Saving the best for last. I’ve long been fascinated by Agostino Iacurci‘s work. It ticks all the boxes for me.

Minimalist, colourful, large scale, with clean and sharp lines that combine with an air of mystery – a story is always lurking just beneath the surface. Check this piece out just a stones throw away from Lucy McLauchlan’s om Carrer del Bellaire. 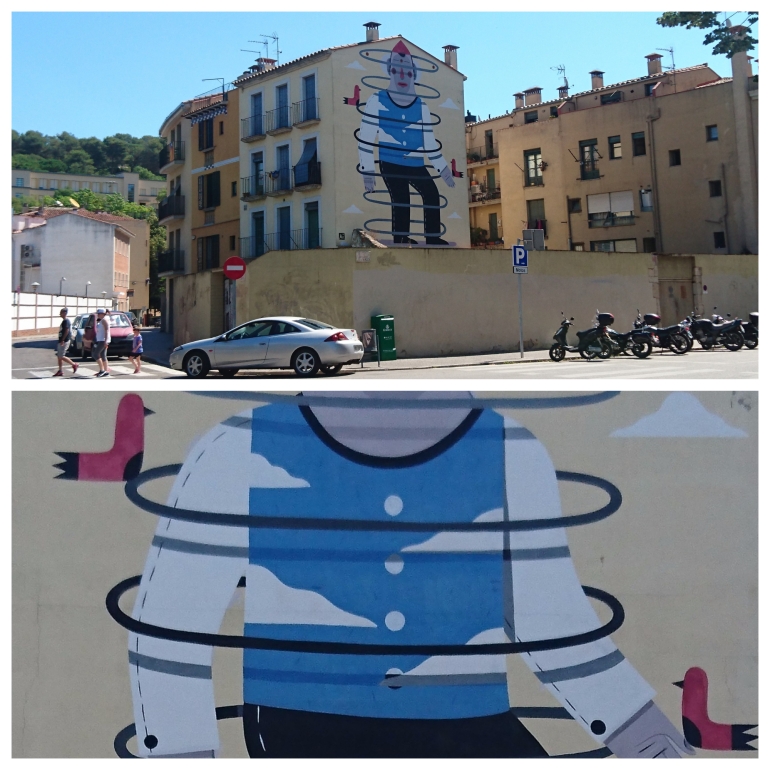 Although this is the final stop of this particular tour, Girona has plenty more to offer.

This article from the List shows you a few other examples from the likes of Sam3, Momo, Malakkai and Interesni Kazki that you can hunt for. If you have the time, go for it! Girona has plenty more to offer than this short tour.

Last thing from me on this, if you take this route let me know how you get on.  If there’s any new work to check out along the way I’d be excited to know more. Of course, some of the work might have changed since I visited and wrote this tour, so it’s always good to know what needs editing or if anything simply can’t be missed!