We were lucky to speak to two prominent members of Visual Artillery (VA) this week, Heritage (founder) and Skezch – pronounced Sketch – currently active throughout California and Boston respectively.

VA was set up early in 2011 with one purpose in mind, to become an international collective of street artists. Fast forward several months and VA has members in Australia, England, the US, Mexico & the Netherlands, to name just a few. They spread their own and other artists’ work in their cities. In this way, an artist in Melbourne could have their posters or stickers put up in L.A. without having to pay for the travel to do so.

We also spoke about their project “Heart Transplant: A Street Art Documentary”, a doc aiming to explain street art, and the passion of the artists and learnt of some interesting new inventions…! 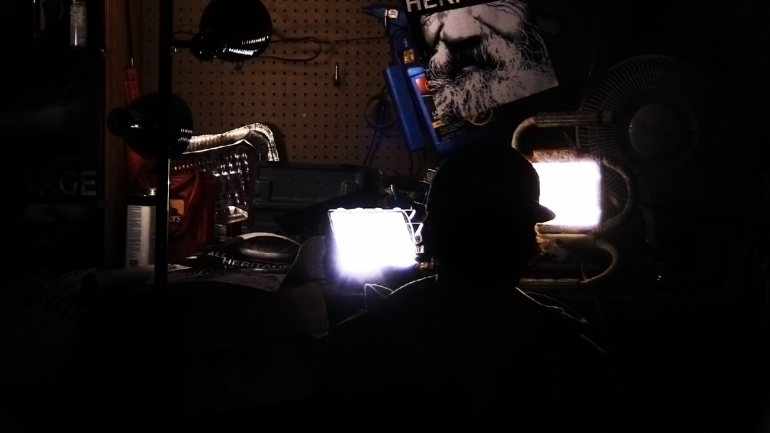 UKB: How did you both end up getting involved in street art?

Heritage: I literally woke up one day, never having painted before in my life, and started making these paintings everyone flipped out about and loved. They resembled minimalist stencil graffiti, and that bridged the gap. Now I do both, and of course wheatpastes and stickers.

Skeczh: I’ve been doing street art since I was 14 or 15. It all began in Venice Beach when I met other kids around my age who were heavily into street art in LA. Most of our stuff had some sort of theme of inspiration or hope, and occasionally just to give people a laugh or send a positive message. I wanted to put things up on the street that could positively impact people. I still do to this day, which is why I joined Visual Artillery. We foster the same goals I had as a teenager in LA, except on a global scale. Now I’m doing art in LA and Boston, and have my own side project which is a street wear company. The profits from that will be funnelled back into my art.

“… I wanted to put things up on the street that could positively impact people. I still do to this day…”

UKB: How did the idea for VA come about? Was it a natural progression from a group, or an explicit decision to create one?

Heritage: The idea for Visual Artillery came from me looking at the roster of Heart Transplant: A Street Art Documentary and realising that a core group of artists were contributing the most. I was good friends with all of them, and I talked to them all to see their ideas on all of us forming an international art collective. I acted as the founder, although that’s nothing more than a title – we all lead VA.

UKB: So how have artists become involved?

Heritage: The artists spread the word about VA, find opportunities for our art to benefit communities, and find ways we can help people in need through our art. They also contribute the most footage out of anyone for Heart transplant.

UKB: In what ways are you seeking to help people?

Heritage: Although much of what VA does right now involves filming for the documentary, our future plans are to have artists directly benefit charities, recovery efforts from natural disasters, and food-shelter projects for developing communities and countries

Heritage: Does “not giving up” count? We’re all doing this out of pocket, and it started as a little thing in my studio. Now it’s on 5 continents and features the talents of world-respected artists like C215 and Irek Tankpetrol. The biggest development keeps getting overtaken by newer, bigger developments.

UKB: I’d say that’s a pretty big part of your project, the fact it’s all self-funded is really impressive. With the likes of C215 and Irek Tankpetrol, how did you come to know about them and get them involved?

Heritage: Honestly? I just emailed them. If you’re straight-up, direct, and sincere with people, they usually hear you out. C215, himself, is one of the reasons I started painting, and Tank was just an outstanding artist I had heard of. A few emails later, C215 is on board for the documentary and Tank is a member of VA.

UKB: VA creates some really thoughtful articles, which it could be argued are sometimes lacking from the movement. Do you think these help to remove the stigma from ‘graffiti’? What would you say is the purpose of them?

Heritage: That was the original intent of Heart Transplant. Since VA formed from the core group of artists on crew with the documentary, that mindset is definitely something we embrace. We want to show the world that many positive things can come from graffiti and street art, legalized or not, if it’s done in a respectable way. We’re against just screwing up communities with senseless graffiti, but we fully support artists looking to express an enriching visual medium within communities. There’s plenty of examples that show graffiti and street art benefit communities and individuals far more than it hurts them.

UKB: Not happy with being a talented bunch of artists, with a project and collective taking off, you guys also have a few inventions in progress! We’ve heard rumblings of ‘Monsterpaste’? Any details you can divulge?

Heritage: Ha ha yeah, can’t forget that. Monsterpaste is essentially weapons-grade wheatpaste. I was tired of my wheatpaste getting pressure-washed, so I cut some of my art time out and studied some chemistry and physics, and created a wheatpaste that resists all forms of removal. Pressure washers, steam, sandblasters, everything. The easiest way to remove it is to buy a new wall.

UKB: Sounds pretty impressive! Any other innovative street art weapons in development by the members of VA?

Heritage: We’re also cooking up some “quickpaste” – field expedient dry powder you pour in a water bottle and shake to make wheatpaste, with no heating necessary. We’re going to freely publish the recipes, and we have no intentions of selling them.

UKB: Sounds like a good way of reducing the time spent in risky situations! Any daring missions/near escapes so far?

Heritage: I think the most intense thing was to wheatpaste a billboard, a good 60 feet up. It doesn’t sound very tall, but when you’re up there with a 1 foot ledge between you and the ground, trying to manoeuvre your paste bucket and poster, it’s pretty crazy. As soon as got off the ladder, a cop drove by, not even paying attention to me or the billboard. Tax dollars hard at work! Honestly though, it shook me up to almost get caught for the size of that piece. It was only up for a few days, and it used a test batch of early Monsterpaste. Although I didn’t see the removal itself, I can imagine it required removal of large sections of the billboard.

Skeczh: Being a street artist, you have to be smart when it comes to the law. Don’t be so obvious is the most common sense rule, but many people lack that today. You just always have to go into things thinking you will get caught, that way you have an escape plan. There was one time, I, along with my crew, were hitting a billboard down town with one of my posters, and locked ourselves on the roof. We had no way down this building and thought we were going to get caught since the billboard was right smack dab in the middle Los Angeles! We ended up sleeping on the roof until the morning with enough evidence of vandalism to completely screw us over…I’m talking buckets of wheat pastes, back packs full of spray paint, posters, brushes, etc. Then in the morning we had someone sneak into the building, up the stairwell to the rooftop to let us out. When you realise you may get caught for doing something you love or believe in…it’s a beautiful feeling, perhaps the ultimate freedom.

UKB: Has there ever been a time when you’ve thought the punishment of being caught outweighs the positive aspect of getting your work out there? What is the over-riding factor in going out to get the job done?

Heritage: The danger is part of the reason why I do street art. Everything worth accomplishing carries risk. It’s that simple. I almost want to say that for the serious street artist, it’s a good experience to get caught. It puts what you’re doing in to perspective. The balance between the artist and their art is very much a romantic one, and sometimes it helps to value what you do to have it in jeopardy.

“…when you realise you may get caught for doing something you love or believe in…it’s a beautiful feeling, perhaps the ultimate freedom…”

UKB: As a worldwide project, where has been your favourite place to paint/paste/stick/film so far?

Heritage: I think it’s a three way tie between Barcelona, Paris, and San Francisco. Each city had such nice folks who appreciated the art I was putting up, I don’t think anyone in any of those cities had a bad thing to say.

UKB: Where do you take your artistic inspiration from?

Heritage: That’s a tricky one to answer.. In many ways I get my inspiration from cultures abroad. Everyone from the Prussian culture to the Persian culture and in between, and the embraced heritage of the people there. That’s why I call myself “Heritage” – My largest source of inspiration is also the thing I respect most about people: Their heritage. I alter the imagery to reflect the culture and the people where I’m painting. I try to take the direct influence from any memorable people I see in that town or city, or I design a poster featuring someone that reflects the people who live there

Skeczh: My motives/inspiration when I began doing street art were completely about my family. My family was going through a very rough time when I was in high school. I couldn’t handle being at home, but I felt guilty if I didn’t do anything. I went out into the streets putting up inspirational/hopeful art in hopes that my family would see it. I thought maybe if I could impact people..why not my family? I’d be putting up art on LA underpasses that were on the route to my father’s offices, hoping he’d see them. I got into street art with the purest intentions and I wish people could see that. Most people think it’s selfish vandalism, but it isn’t. That’s why I’m in Heart Transplant..because we want to show the world that this isn’t about “selfish vandalism.” Street art was/is/always be my escape and my personal form of expression. Nothing will ever change that.

Two thoughtfful answers there, which seemed like a good place to round up the interview. Thanks to Heritage and Skeczh for their time, and detailed answers.