Randy Fox is an American photographer whose work distils beauty and loneliness from the changing landscapes and lifestyles in the northeastern corner of the USA more commonly known as the Rust Belt.

It’s a term that acknowledges the region’s decline from manufacturing powerhouse – home to the ‘big three’ automobile manufacturers of Chrysler, Ford and General Motors – to stagnant, job-starved relic of the not-so-distant past.

Cutting through this bleak, stagnant world, Randy’s work gives us his own slice of an America which lost all its swagger and pride as people followed the manufacturing industry south.  But more than a portrait of nature reclaiming the man-made, it’s an arresting and intimate view of a country baring its soul as it submits to a quiet, ominous demise

UKB: How did you get started in photography?

Randy Fox: My interest probably got more focused in my teens and first seeing Robert Frank’s work.  After that, my photographic activity ebbed and flowed for a while, depending on how much I was wrapped up in playing music and writing.

UKB: What interested you in taking pictures? Do you dabble in any other forms of creative expression other than your writing?

RF: Discovering Robert Frank was an eye-opener to me. And though my work is nothing like his, his artful documentarian style, spoke of all kinds of possibilities to me.

I’d been playing in bands since I was 15 and had an obsession with music that began even long before that. I had also been writing about music, film and literature off and on for some years.

UKB: Have there been specific inspirations for your work, such as people, places or events?

RF: My childhood had a huge influence on my photographic interests. My father had a large degree of wanderlust that played a large hand in us moving around the eastern half of the US very frequently. As a child, we seemed to spend a lot of time on the road. At that time, which would have been mid to late 60s into the mid-to late 70’s, America’s towns and cities still had somewhat of a local identity and, even as a young kid, it was invigorating to soak all of that up.

The Factory Belt region, where I live, is always an inspiration to me. There have been times, over the years, that the weight of the area felt too negative, but I have come to something of an understanding with it all. 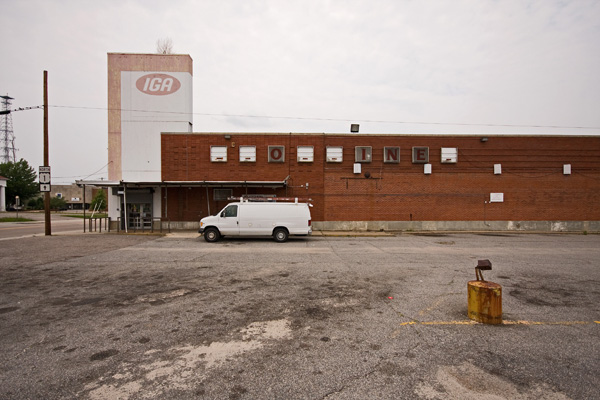 UKB: What attracts you to the decaying buildings of the Rust Belt in particular?

RF: Even with all of the early moving around my family did, a large chunk of my life has been spent in the factory valleys of western PA [Pennsylvania]. I saw the towns hustle when the factories where booming and I saw them wither and die when the work went overseas. Of course, now I document the aftermath. There’s a poignancy and sadness present in so many of the Rust Belt cities and satellite towns. I tend to find “ruin-porn” to be offensive; I shoot the structures and scenes that I do, almost in tribute to the dreams, hopes and ingenuity that was once housed there.

Everything, no matter where one goes in our country, looks the same. The same businesses, the same architecture – it’s all interchangeable. There are times, when I’m photographing those lost enterprises from the mid-20th century that I feel like I’m rummaging through the remains of an ancient empire. 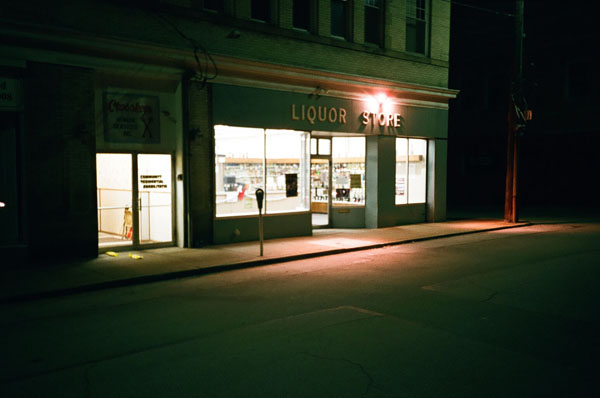 UKB: Your work plays close attention to cars, laundromats and churches. Why do these interest you?

Laundromats, inherently, convey such a transient loneliness that I’ve always found captivating. In my area of the country, so many of the laundromats haven’t been updated which only adds to the already strong allure.

The arc of the American auto industry and the fortunes of the Rust Belt are so intertwined. It’s not unusual to see those older grand pieces of Detroit muscle still being used for very utilitarian purposes. Many of those cars never had the opportunity to be pimped out as show cars; they were salvaged, repaired, and repaired again, so they could still get their owner to work or to buy a carton of cigarettes. There’s a poignancy and sadness in seeing those cars in the yards and driveways of area homes. As far as styling goes, Automobile styling has been going downhill since the ’71 Buick Riviera.

The many storefront churches that populate the urban centres of the Rust Belt, to me, have always been indicative of the desperation and emptiness that has beset these areas. There are many stretches of city blocks in places like Detroit and Buffalo where the storefront church is the only thing half-operational, but, even then, most of them seem to open and close very quickly. 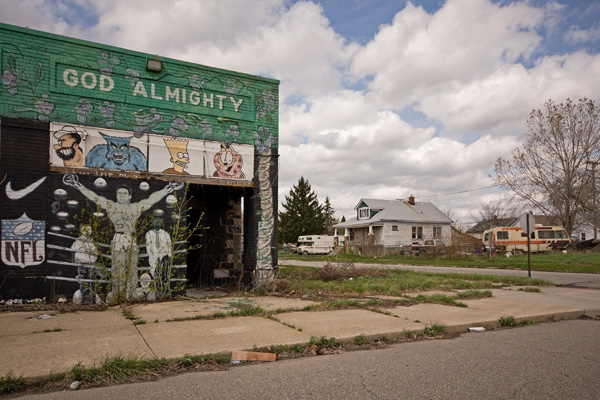 UKB: Your photographs of forgotten America in decay may be perceived as containing elements of social and political commentary. Do these kinds of considerations enter into your mind when finding your subject?

RF: What has happened to the US politically and corporately has had a huge bearing on what’s happened in the Rust Belt, so my personal and emotional feelings in connection to the scene I’m photographing can’t help but end up, at times, political in nature.

But, it’s true – I do have strong feelings about it. If people really want to see what’s become of the American Dream, they should visit Clairton, PA or Youngstown, Ohio. The people of these towns are virtually forgotten.

UKB: Your work features a distinct lack of people. In the future, can you see yourself conveying themes of decay and loneliness via the people who live and breathe the kind of scenes you photograph?

RF: For whatever reason, I’ve never been all that interested in photographing people, though I admire the photographers who do it well.

UKB: Some of the photos are vacant and sparse, but also rich in important stimuli which make them appear almost like paintings. Do you wait for the opportunity, or shoot as you come across something interesting in its natural state?

RF: I’m not very patient, so unless it’s a minor wait for a car to pull away or a person to cross the street, I’m going to take the shot. You’d be surprised at how alone I am in many of these areas. Even in the larger urban centres, many of the neighbourhoods that I spend a lot of time in are nearly vacant.

UKB: Has the focus of your photography changed much over the years?

RF: I can be rather obsessive in my habits so there hasn’t really been a grand shift, but I have noticed certain subtle changes. Over the last couple of years I’ve noticed that I’m pulling back farther – adding more of the landscape.

UKB: Your work is very focused on capturing a specific region of America in decline.  Can you see yourself working in other distant parts of the country, or even outside the US, in future, or do you feel your personal connection with the areas you currently shoot is something that cannot be neglected?

RF: I do feel a deep personal connection to the Rust Belt region, but there are many other places around the US that I’d love to eventually photograph.  Unfortunately, much of it comes down to time and budget.  If I could swing it this year, I’d really like to do a swing through the Beaumont/Houston area of Texas.  For the old factory cities, Chicago and Gary are high on my list. Historically and politically, the US has been my cause in many ways and it still pulls at me every time.  But, as they say, the future remains unwritten.

UKB: Is there anything you are working on at the moment? Aside from your website, where else can people find your work? Anywhere to purchase prints?

RF: I’m still running the American Elegy website http://www.americanelegy.com which is really a labor of love. It’s been a pleasure being able to talk to such great photographers for that site. I also do a regular photoblog for the Huffington Post. I’m very slowly working on a book, but sitting down to organize it and put it together has proven to be an agonising process. The best place to see my work, get current updates, and purchase prints, is at my website at http://www.randyfoxphotography.com.

Huge thanks to Randy for taking the time to provide us with insightful replies to our questions, and be sure to take a look at both his American Elegy site as well as his photoblog.