Urbankulturblog caught up with street artist/poet ‘Laser 3.14‘ a week before his latest show ‘Let me know the rules so I can ignore them‘ opens at Wieden+Kennedy, Herengracht 258, Amsterdam on May 3rd. 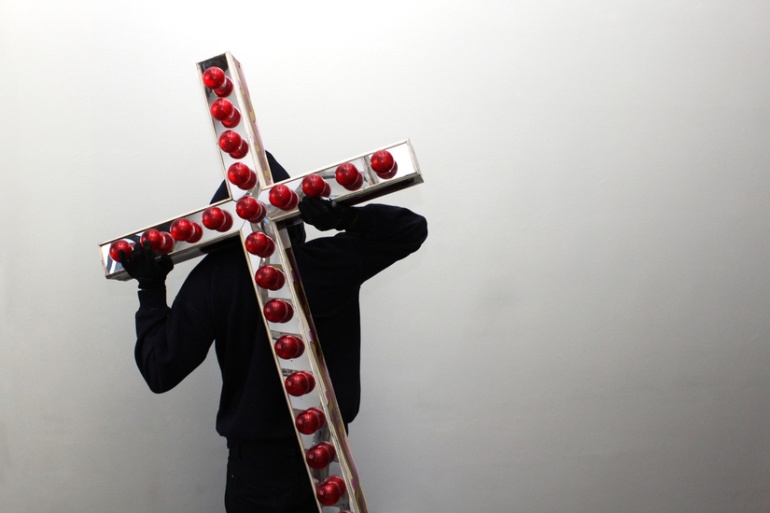 Hailing from Amsterdam, Laser responds to the world with his unique style of street poetry that stirs conversations all over the cities in which he writes. He’s happy, in fact you could say he relishes, tackling difficult topics head-on.

Just recently, a new photographic series on Laser, shot by rising star Anne Barlinckhoff, was released. Anne’s documentary style photography has a unique playfulness that allows us to see the artist and his work in a different light.

UKB: Can you give us an idea of the work you do for those who may not have comes across it before?

L3.14: Although I see myself as an artist covering an array of disciplines I think you could call my work ‘street poetry’. On the streets I use primary words, which cover a broad scope of subjects, but the most reoccurring ones are a critique on politics, religion, politically correct fascism – which I truly despise, love – unrequited or not, discontent etc. I primarily use non-temporary surfaces like building boards because for me it connects to the concept of transitoriness. I love the ‘here today, gone tomorrow’ effect of it.

UKB: How did you come to work with Anne on this new photographic series?

Laser 3.14 (L3.14): Mark Chalmers (from the garage) was quite central to this. We’ve been collaborating, developing my work in different media and he has a good eye for talent. He’s been aware of Anne’s work for some time and wanted us to work together. Consequently, Anne had the same thoughts. So we met, bounced some ideas around and got to work. she can make interesting stories with simple props. A real mix of concept and documentary style which is rare.

UKB: What sort of ideas and themes were involved in the creative process, and what was eventually settled on?

L3.14: The themes are me in my comfort zone working anonymously in the night and amongst shadows. Anne thought it would be interesting to show parts of my comfort zone without actually giving too much away. I don’t like to let too many people into my private life but when she presented me that concept I was interested how she would achieve it and we went to work. Honestly I really like the results. She did a really great job.

UKB: What sort of work can we expect to see as part of it? What media will your work be in?

Well, the basis of the show will be 10 prints with 10 different quotes in 10 different colours, which I first exhibited in the Unit-44 gallery Newcastle and now I’m showing for the first time in Amsterdam. I’m also going to show some laser cut steel shields of my quotes and handwork on wood panels. Plus we’re going to build a scaffold installation where we will hang work in – bringing the street inside.  It’s going to be a nice mix of works and techniques. 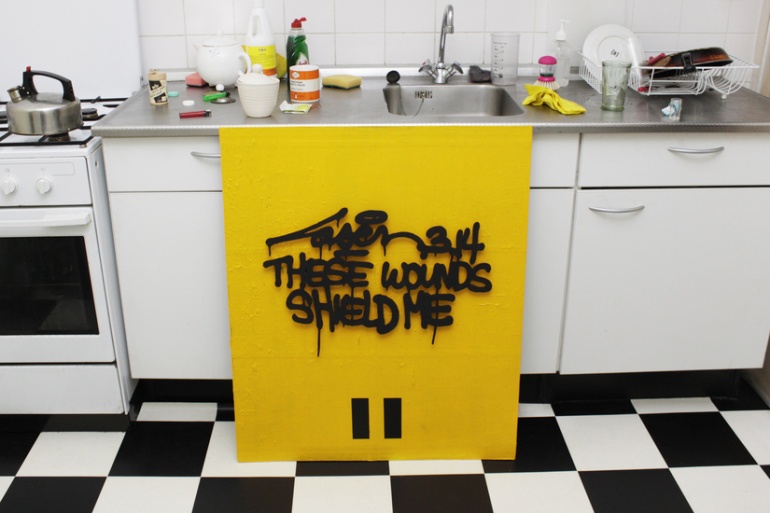 UKB: You appear to thrive when tackling difficult issues in modern society. Issues that many shy away from for fear of causing offence. What sort of work have you produced recently in reaction to contemporary events?

L3.14: ‘The priest who loved me’ about the behaviour of the Catholic Church recently is a good example. Terrible crimes of abuse and yet it’s almost taboo to talk about it. I simply hit the streets with the line ‘the priest who loved me’ which says both a huge amount and little in one go. We need to bring difficult issues out to deal with them. Another good example (‘God kills more than cancer’) are all the religiously inspired terrorist assaults & bombings, forcing religious repression on seemingly peaceful societies, and religious intimidation and imperialism. These are problems that not only concern me but concern a lot of people around the world. Due to some very dangerous political correctness, there’s a taboo to address these problems. These taboos should be lifted, so problems can be solved. Not talking about them really doesn’t make them disappear, listening helps. True injustice and intolerance is created by those who remain silent and those who silence others: “No escape for the docile man”.

Thanks to Laser 3.14 for his time, very interesting guy who doesn’t mix his words. Thoughtful artwork too, executed simply but effectively. If you’re in Amsterdam on May 3rd, remember to check out the show! UKB

Tags: amsterdam, anne barlinckhoff, documentary, laser 3.14, photography, poetry, Street art, tell me the rules so i can ignore them