Something a little different today – not exactly street art related, but definitely worth the detour both in terms of content and in getting to the venue! Lucie Hrnickova & Andy Cumming’s show ‘Gold Sheep’ had its opening night at one of Edinburgh’s most popular alternative art spaces, the Old Ambulance Depot. Urbankulturblog went along to check it out.

Andy writes that his ‘prints were inspired by ideas of tacit knowledge and the intuitive way children make art’ initially, before he moved to incorporate other media, such as video projections, during his Masters course at Edinburgh College of Art. 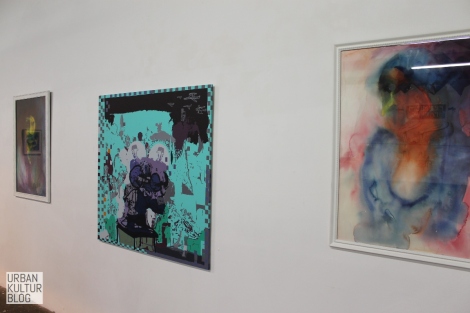 Having taken some time away from working, he is now back to producing new woodcut prints and mixed media paintings. His new works respond to his interest in culture constructs such as transhumanism, genetics and social engineering. These new woodcut prints alongside large mixed media paintings are examples of his first 2D work since exhibiting at the prestigious New Contemporaries exhibition at the RSA in 2010 (he won both the RSA and Edinburgh Printmaking prizes). I found myself staring at the pieces multiple times noticing more detail every time, adding and changing the image and my previous perception of them. The phrase ‘give me a baby and I can make any kind of man’ repeating in my mind, exploring the social engineering, nature v/s nurture aspect of human development. 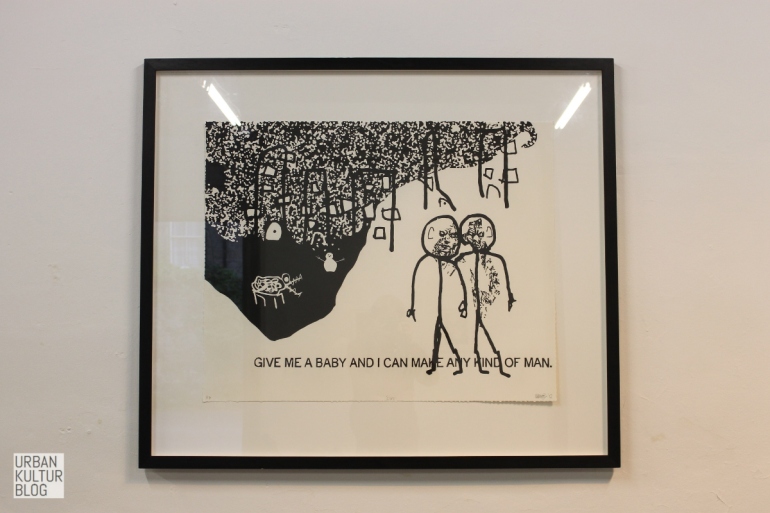 An experienced printmaker, Lucie has exhibited at the Mall Galleries in London where she won the ‘Intaglio Printmaker’ prize. In 2010 she also took part in the 14th International Biennial Print Exhibition in Taiwan. Lucie’s work, is both stylistically and thematically different to her exhibition partner’s. The atmospheric multi-layered stone lithography prints & larger watercolours evoke the darkness of the eastern bloc, specifically within Czech culture, with autobiographical undercurrents.

All this may sound a bit heavy, but the space feels relaxed, helped by the addition of a large scale version of a sketch (available in a zine sold at the exhibition) on the farthest wall. Definitely the most interesting use of the space I’ve seen recently! The zine, titled ‘Radge’ (great Scottish term!) is currently in the final stages of editing, but the first copies provide a tantalising glimpse into what can be expected. Not for the easily offended, and definitely worth a flick through and purchase.

‘Gold Sheep’ runs until the 9th of July, don’t miss it!