This week I caught up with London based artist Dscreet for an interview to find out about the work he’s been putting out lately, as well as collaborating with other artists to curate the highly anticipated Dubl Tubl show, launching later this week at Urban Spree in Berlin. The show brings together a staggering 80 street artists to collaborate in pairs, with some very interesting combinations.

Although perhaps more commonly known among street art fans as the man behind the ‘electrified owls’ that perch around parts of east London, he’s worked with a range other media – film, interactive design, painting, sculpture and installation.

Dscreet first experienced graffiti, as many do, through friends who painted. “We used to tag all the spots we skated and at some point drawing and piecing became more important to me than skating”. He later moved onto his trademark character, “the owl is a really loaded image, it means different things to me and the more I learn about owl symbology around the world the more I realise how diverse the interpretations are.” [Interview with Street Art London, 2012]

In between filming in Australia for “Baywara: The Film” and setting up at Revaler Str., he took some time to shoot the breeze with UKB.

UKB: You mention you got into street art now via skating, painting & tagging etc, but how did you come to settle on the character you have now?

D: I was doing letter throwups but I grew up drawing cartoons and just wanted to incorporate that character style into a quick iconic throwie.

Owls are my favourite animals and they already look like caricatures of a bird, so they fit the bill. I love painting those dudes.

UKB: Have you ever felt like changing style completely and starting over? DJs/Producers start to release stuff under different aliases, can a street artist do the same?

D: Yea I already did. I used to do really technical wildstyles, detailed characters and experimental abstract pieces, played with 3D rendering and all that good stuff, but it got boring and so I reinvented my style and went back to basics, a lot more fun. People who used to dig my shit dubl hate it now, I think that’s the sign of a good move. 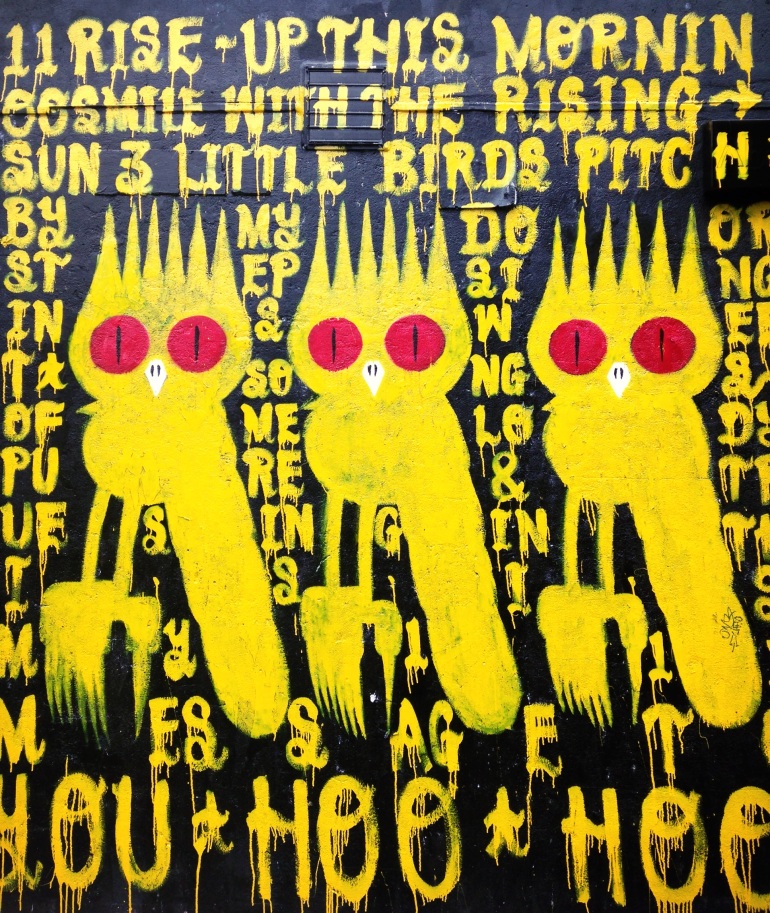 UKB: Where would people be most likely to find you/your work in London just now? Any favourite parts of the city to paint at the moment?

D: Mostly East, a bit played out but I still like it there.

UKB: As a tagger back in the day, what are your thoughts on the so called ‘internet-age’ of street art and graffiti? Good or bad? A natural progression? Does the internet /street art blogs take away some of the appeal of street art?

D: Its all good, the internet’s cool, I often use it. You can also walk the street and kick cans in the gutter on your way to the internet caf.

UKB: In an interview with Street Art London blog a few years back you mentioned that you thought “graffiti legends will be taught about in school”. How much closer do you think that is to becoming a reality given the number of street art based shows/exhibitions art auctions there are now?

D: It’s already happening, I get so many uni students writing and asking to do interviews for their latest art thesis and I’m not even a “Grafffiti Legend” so I know they are studying the big guns at school or at least incorporating those artists into their research.

UKB: You’re stranger to diverse collaborations having worked with Connor Harrington and Lush among others. What do you think makes a good collaborative piece? Does painting as a duo introduce any fear about screwing it up for your partner?! And, do you have any particular favourites of your own from the past?

D: Good collabs; just being pals who can have a laugh at each other and bounce ideas, it’s best if you bring completely different styles and ideas to the table and embrace the fact that someone else is way better than you at certain things. The duo thing actually frees you from all that anxiety about fucking it up ‘cus you can just blame the other dude, everybody’s happy.

“…the duo thing actually frees you from all that anxiety about fucking it up ‘cus you can just blame the other dude, everybody’s happy…”

Past favourite; the DUBL TRUBL streetfighter collab with Reka (below).

UKB: Dubl Trubl sounds like it’ll be a blast – why did you decide to host the show in Berlin & Urban Spree? Will it make use of the big outdoor space, or will it be indoor? Or both?

“… [Dubl Trubl is] a bad idea that I fished out of the ether during a transcendental meditation session with David Lynch, the beast put it there….”

UKB: Where did the idea come from? Organising it must have been some serious ball ache?! What’s been the most fun & least fun (apart from answering these questions…) part of the whole experience?

D: Oh yea all these flakey fuckers are aching my balls to the max, it was a bad idea that I fished out of the ether during a transcendental meditation session with David Lynch, the beast put it there. Actually its been relatively painless so far…I know I’m speaking too soon.

I dig it when people tell me they had fun doing their collabs, if they’re having a laugh I know the piece is gonna be sick and loose and not the norm.

Least fun? We don’t speak about that here…

UKB: How did you pick the pairings ? Which of the pairings are you most looking forward to seeing complete a piece?

D: I chose people who despise each other and knew it would be difficult to spend time together with hatred oozing through their fake clenched smiles. I specifically look forward to seeing Timba and Twoone’s collab, because Timba told me it’s the best thing since Arnie immortalized the phrase “get to the chopper!”, he’s basically set himself up for a huge fall…

UKB: Any surprises/plans for the opening night? What should people expect?

D: Uber-long minimal techno sets, currywurst, glowsticks and Peruvian energy drinks, if that doesn’t get you excited then you’re dead inside.

I tend to agree with him there! Sounds like it’ll be a great exhibition and opening. If you’re in Berlin between the 18th of September and 26th October go check out the 40 collaborations of street art’s finest. Names like Reka, Lush, Thierry Noir, Nychos and Dave the Chimp will give you an idea of the standard!

In the meantime, check the video above of Skewville, who while unable to make any work for the upcoming exhibition, found 2 dead rats instead…