Jimmy Cauty’s travelling shipping container could quite easily be left alone anywhere in the country, passers by blissfully unaware of the scale-model chaos unfolding within. But thanks to a number of eyeball sized viewing ports the public have an eye in on a unnervingly plausible dystopia.

Let me set the scene for you.

ADP 1 –
or Aftermath Dislocation Principle part 1 – is a 40ft, 1:87 model of a dystopian village set somewhere in a mythical Befordshire. What’s left of an unknown cluster-f*ck of epic proportions is a landscape irreparably smashed to bits and totally deserted. Save for a heavy police presence and smattering of media crews.

Flashing blues emit from police cars and overhead helicopter searchlights scan the location…it’s an apocalypse of some sort. But all is not what it seems in Cauty’s ‘New Bedford’. Peering in from one of the viewing holes, your picture of this new town after “the end” is pieced together bit by bit.

Idle hands of Police turn to mischief. No rioters are to be seen and they soon take on the role of trouble maker.  A group of officers hijack a piece of graffiti to make it read “COMETH THE HOUR COMETH THE STATE“, another group are putting the finishing touches to a familiar phrase “F*CK THE POL” is all they’ve painted so far. But I reckon you know where that one’s going. 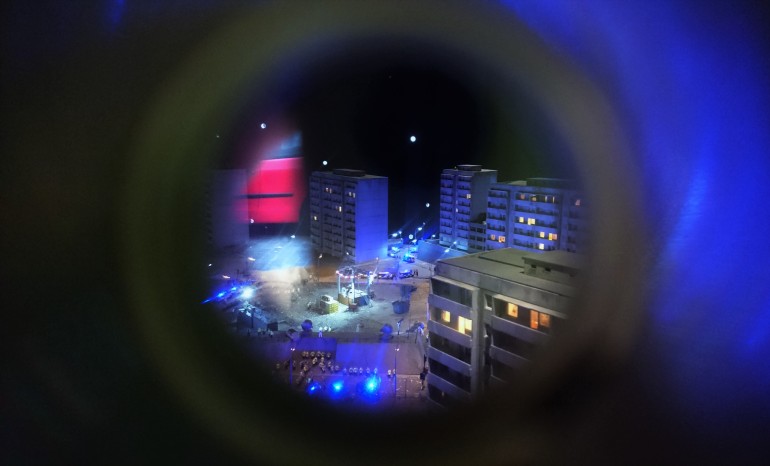 Elsewhere a fireman is decapitating an officer who is being held down by another. With a chainsaw. A lorry has smashed through a MacDonald’s restaurant, but across the river a giant hamburger is dragged into the town by police officers. It’s a piece of art that rewards your patience and attention, like an episode of Arrested Development that surrenders a few more subtle gags with each watch.

So a little about the piece and the tour it’s currently on around the UK. Jimmy Cauty’s ADP1 has been on the road since April this year (2016, in case you’re reading this in the future), specifically at locations that have experienced riots or significant civil unrest in the past, forging that connection to the art. In the accompanying book it notes the places are those that have experienced:

The theory behind housing the artwork in a shipping container is really smart. It’s art, not made for the 4 walls of a gallery, or to sit on a plinth. It’s self contained and completely off the grid. It can exist anywhere, and it does exist anywhere. It’s packaged up and ready to go. It also draws on the theme of the travelling show, a hit and run event that’s there one week and gone the next, leaving its own aftermath in much the same way as civil disorder does.

It rolls on to the next town like the contagious nature of a riot itself, a little like the prison riot at HMP Bedford prison and the escaped prisoners at HMP Pentonville within 24hrs…

One of the things I love about the art and the container is that come Christmas Day 2016 it returns to Bedford having collected the tags, throwies, stencils, sticker and paste ups from all the cities it visits. Collecting disobedient behaviour as it moves from town to town. The place where the art is held becomes a piece of art itself. 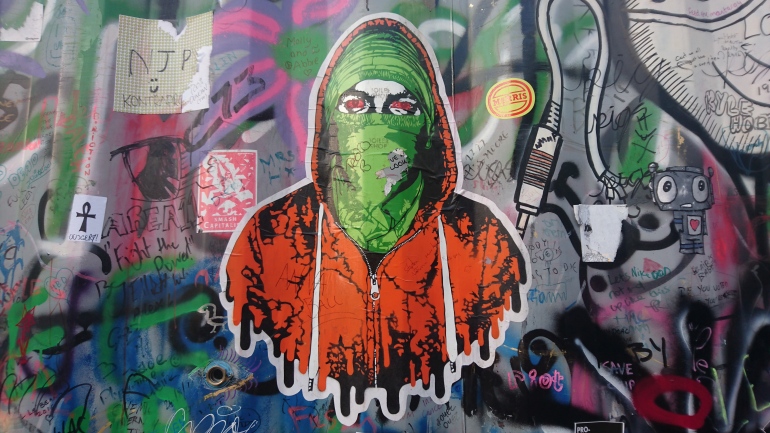 Sunday 6 November was the last day of ADP1 in Edinburgh, but it’s rolling on along the M8 next week, so there’s not too far to travel if you want to peer in on the disturbing, funny and thoughtful dystopia of ‘New Bedford’.