Although still retaining the electronic touches that are integral to Grit, Bothy Culture definitely leans more heavily on Scottish folk, and is probably a more natural fit for live orchestral reproduction. That said, there was still plenty of improvisation and smart touches to bring the albums electronic segments to life.

“This is, and always has been, about the music” says Lawson, and the crowd whoop and applaud to show their agreement.

On his website, Bennett explained more about Bothy Culture prior to his death in 2005:

“It is celebration of my culture. It is also a celebration of two other cultures that have really spoken to me through their music even though I did not know much or any of their language.”

“There is a dichotomy in this music, a gentle old tradition of the land and the sea against the neon technology of our growing urban culture. The tunes are of an old style: Scottish, Irish, Swedish even Islamic. The beats and mixes are of a new style: Garage Breakbeat, Trippy, Hip, Drum and Bass. I hope when you listen or dance to these tunes you get a sense of your own roots.”

Martyn Bennett’s legacy of dance-infused Scottish folk music pulled folk music away from the traditional “misty-eyed” picture that once sprung to mind, a point that Lawson was keen to remind the audience of when he and the orchestra initially took to the stage.

While his music is now widely appreciated and universally loved (they were playing once again to a 3,000 strong sell-out Playhouse crowd) at the time of its release it was often regarded as an unwelcome take on Scottish folk music, and certainly not seen in the same light as it is now – a pioneering take on a traditional format.

The Grit orchestra, a super group from across the musical spectrum, is itself a message of musical inclusion, cooperation and acceptance and is mirrored in Bennett’s music which brings wildly different sounds and cultures together. Lawson hoped that this message would find its way back into the real world during this time of significant ideological shift. A fairly political start to the performance, but one which the crowd showed its agreement with.

Things soon kicked off with the energetic Tongues of Kali, pulling on that idea of cultural fusion Bennett alluded to, with the punjabi flavoured vocals and instrumentals. This raucous intro brought the crowd back to energy levels we were left at the finale of the 2016 Grit performance.

“Aye?” soon followed – with it’s equally hectic finish, recreating the samples phone conversation sample heard in the album version. Aonghus on vocals made good use of an old school telephone to get both him and the crowd in the mindset of the song, and raise a few bonus laughs from the audience too.

Next up, the trip hop beats that tie Aye? together were backed up with low end bass from the tuba, before really taking off as the second half of the song does with epic string sections and fast paced drum and bass inspired beats. 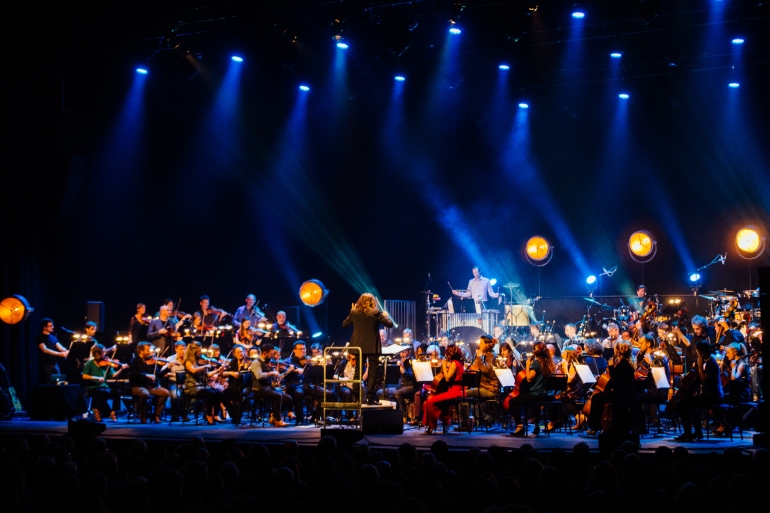 Lawson interrupted briefly between songs to give us insight into the music and inspiration of Bennett, and introduced Ruairidh (cello) another friend of Martyn’s, who he’d spent time with exploring drink, drugs and bothies in the northwest of Scotland.

Shputnik in Glenshiel is the story of a shepherd they’d met along their travels who was described as something of a “professional” in these chemical endeavours, claiming to have seen wonderful things in the sky while “shputniked” – heavily under the influence.

The song itself is a dark and moody arrangement, and the perfect follow up to the bright and bouncy tracks that sit at the top of Bothy Culture. A reminder of Bennett’s talent at composing songs and expertly sequencing his albums to bring you through energetic highs and melancholic lows.

David Hayman’s burr was again put to great use (having been used as a stand in for Michael Marra in Liberation for the 2016 production of Grit) to recite the words of Sorley MacLean in Hallaig, while the cacophonous finish of both 4 Notes and Joik brought the energy and intensity back up again before the poignant 3 minute bagpipe finish of Waltz for Hector.

Lawson promised some big numbers in the encore, and duly delivered with another stunning rendition of Blackbird with the beautiful vocals of Fiona Hunter (covering Lizzie Higgins’ performance on the album version) before finishing on the pounding techno beats of Chanter, whipping the crowd up even further.

Another excellent display from the Grit Orchestra under the guidance of Greg Lawson – who left the crowd with good news. Recordings from the orchestra are in the works, and so another Martyn Bennett release shouldn’t be far off.

You’ll be pleased to here that. Aye?