Nick Cocozza is a Scottish illustrator/street artist who hails from Glenrothes, but now calls the street art mecca, Berlin, his home. I caught up with him for an interview in between running his highly successful clothing label, Bad Blood Clothing, and preparing for a multitude of upcoming projects to discuss his work, career so far and plans for the future. 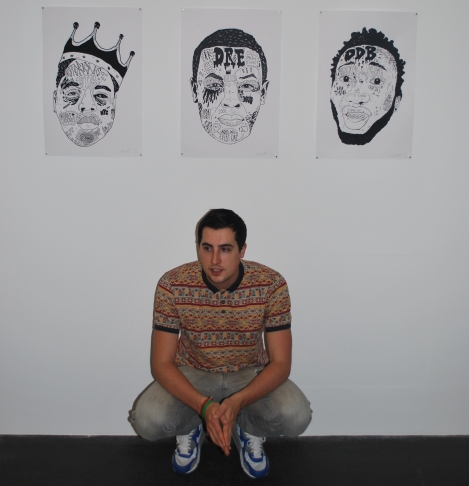 Since starting off as a tagger, bombing everything from motorway underpasses to huge trackside bridges, he enrolled in photography, film and fine art courses before eventually completing his BA in illustration at Dundee’s Duncan of Jordanstone art school.

Through his college years his work developed dramatically from his early involvement in the graffiti scene, having moved on from the ‘big and bold’ style defining his early work, he has now established himself as a multi-talented illustrator.

However, he’s completely candid about his knowledge of illustration back then, ‘I didn’t really know what it was…I always thought it just consisted of children’s book illustrations’. Maybe it’s this attitude to illustration that has had a bearing on his subsequent success? Nick agrees, ‘this is a really good point actually, I would definitely say it was a good start in helping me succeed.’ 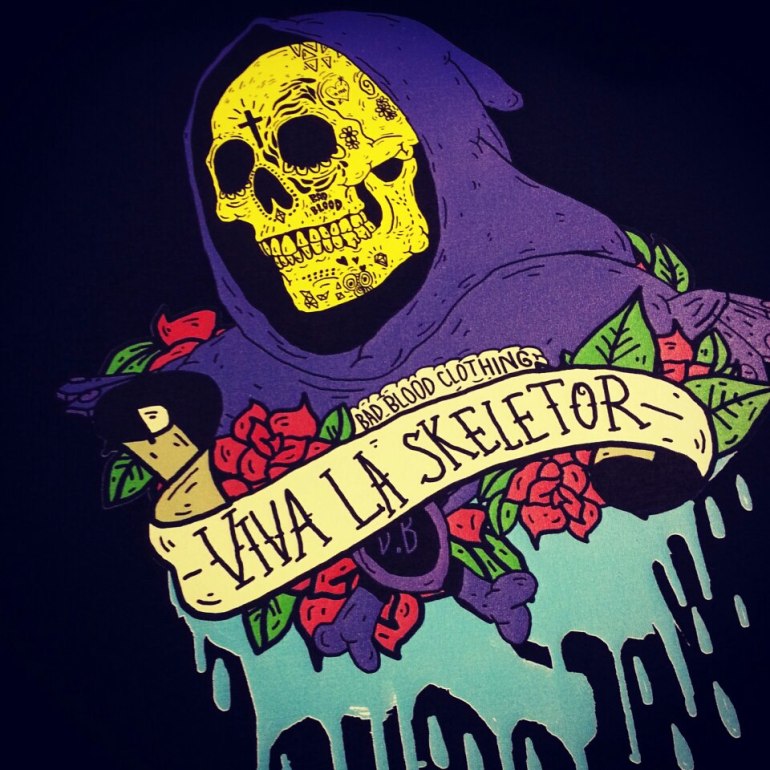 ‘Some people might just go to the library and pick up only contemporary illustration books for reference, it’s so easy to slip into a stylised way of drawing when you’re surrounded by illustrators. Then the whole illustration scene gets re-gurgitated and boring after a while. I would always look further afield when drawing inspiration, movies, books, fine art, music, just whatever comes to me that way I’m constantly pushing my own boundaries and exploring my own visual style.’

He has worked hard to incorporate digital work with his graffiti roots while drawing on aspects of contemporary urban culture. Taking inspiration from conversations, people, textures on walls and memories has aided his artistic experimentation and evolve his style to its current incarnation.

Commenting on themes running through his work he agrees that nostalgia has a big role to play. ‘Being an 80s kid I just loved all the classic movies and cartoons like He-Man and Ninja Turtles, I try and tie these fond memories into my work and share it with others’. His piece ‘Back in the Day’ sums all of this up very nicely, and is a quality bit of work too.

Back in the Day – Nick Cocozza

With all this in mind, I was unsure whether his art school education may have drawn him away from, or indeed, completely ended his connection to the graffiti/street art scene. But as Nick went on to explain, this was not the case.

‘When I went to art school I concentrated more on paste ups. Similar to stencils, I could pre-draw all the images, print them out, roll them up and paste them on the streets. I would say my involvement with street art has evolved along with my own practice. In fact, one of the main reasons I moved to Berlin in the first place was due to the great street art scene, but there’s such an over saturated street art scene here that it’s really difficult to do something fresh and stand out’.

So how does a street artist go about standing out in a scene such as Berlin’s? It’s not easy – is the answer according to Nick. ‘It’s hard to do something really fresh and new with the likes of BLU covering whole office blocks in mad detailed murals’. Instead of adding to the sea of art that already exists on the street, he’d much prefer to bide his time and unleash an idea that is likely to get the desired reaction. With this in mind Nick hints at some big ideas in the pipeline, and urges everyone to stay tuned… 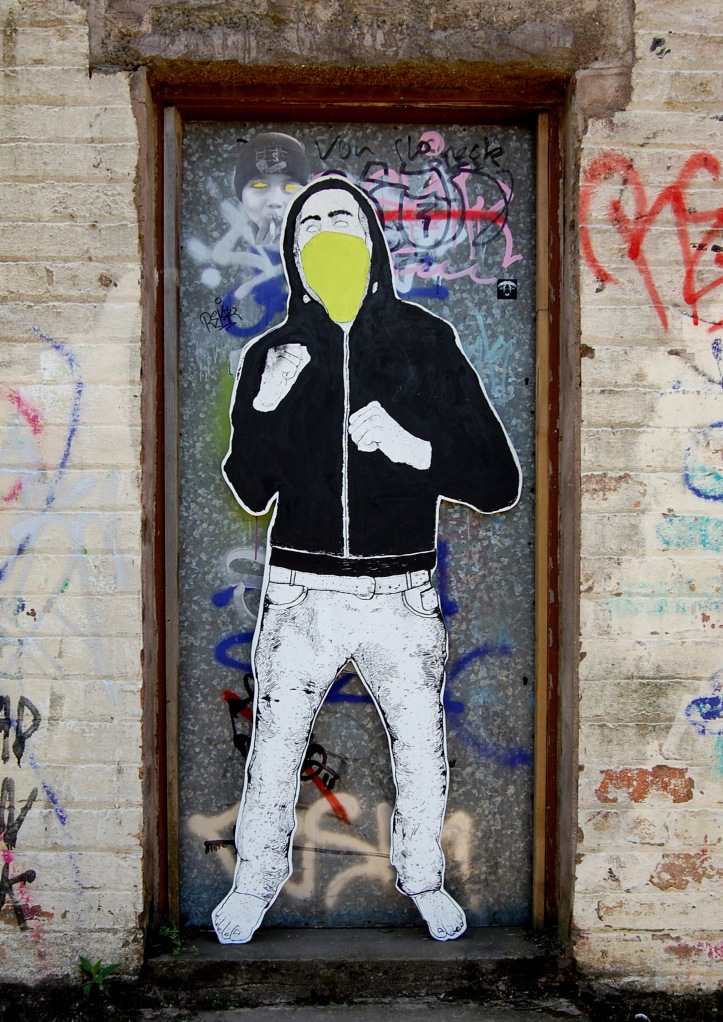 Since making the move he has not only found success in exhibiting his work, but also launched and established his own clothing line. ‘Bad Blood Clothing’ has garnered sizeable support from Berliners and beyond with his unique blend of graffiti, hip hop and skateboarding culture as well as his love for 80s nostalgia.

‘The launch of Bad Blood was also a huge step for me, what started as a bit of fun is slowly turning into a full time business and is being recognised worldwide. It’s such a buzz knowing that people all over Europe, Japan, and US and the rest of the world are feeling my designs and coming back to buy more’.

‘I’m really hyped to expand the Bad Blood brand, get it out there in stores and work on a new line, so I think 2013 will be a big year. The project is growing continually, and has even moved onto the world of sponsorship, putting his brand name to talented skaters Toby Shaw and Dean Robertson, with plans for a Bad Blood skate team in 2013.

In case that wasn’t enough he’s also currently working with Berlin based hip-hop TV & radio show ‘Tha Shiznit’ on some new ideas, including a new hip hop/art event in Berlin. It’s easy to see why he thinks 2013 could be quite a busy year for him!

With all of this on his agenda currently, Nick is wisely not thinking about moving on any time soon. Having done a lot of work to establish his art and clothing range in Berlin, his next step is to feel more integrated in his city. ‘I want to learn German and settle down a bit more here, build some more contacts and keep involved in the art scene.’

‘I think eventually I might move on from Berlin but not necessarily back to Scotland. I like to push myself out of my comfort zone, the fact I don’t always know what I’m doing kind of motivates me in a weird way, a little bit of fear is always good, it keeps me on my toes’.

‘I’ve been here for almost 2 years now and it’s incredible. I would be lying if I said it wasn’t tough though, sometimes I feel like an outsider’.

Having said that, his advice to young Scottish artists still pondering the move is; ‘don’t think about it too much, just do it, if it all f*cks up you can always go back to the UK’.

It’s an admirable, brave attitude and one that has clearly proven to be successful for him, thanks in no small part to a massive amount of hard work, motivation and sustained effort. ‘I’ve had a lot of good exhibitions here since I moved here, both group and solo. I’ve also met a huge amount of cool people. I have a couple of really cool projects on the go just now that I’m hyped for’.

So keep your eye on Nick Cocozza in 2013, it’s clear there’s big things to come from the talented Scot. Stay up to date with his art by visiting his website and deck yourself out in the latest Bad Blood tees and more by visiting his online store. Thoroughly recommend browsing through, some great stuff in there, particular favourites being ‘I’m dying for a cup of tea’ and ‘Real OGs’ – awesome stuff!

Huge thanks to Nick for taking the time to answer my endless list of questions so thoroughly! UKB