Back in London for this year’s UK Blog Awards – and still recovering from the excitement of that event – I struck what is best described as arts-blogger jackpot when I found out that D*Face and Thierry Noir had exhibits open that weekend.

D*Face’s show at his Stolenspace Gallery was really very interesting indeed, but my first stop was at Howard Griffin Gallery for Thierry’s latest show.

Speaking with Richard, owner of Howard Griffin, I hadn’t appreciated that the gallery and it’s LA counterpart has an effective monopoly over Noir’s work. His art exhibiting on both sides of the Atlantic only at Griffin owned galleries these days. Quite a coup indeed.

Having visited during the retrospective held here back in 2014, the spartan layout of the gallery was now banished in favour of a full on glorious mindfuck of an immersive Thierry-opia. Of all the recent “street art” exhibitions I’ve seen, this one really made an impression on me. 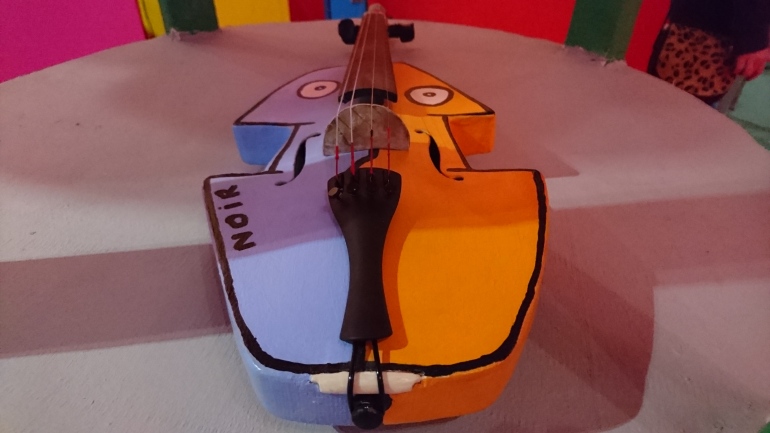 Every, and I mean every, bit of the exhibition space has been painted.

The walls, the floor, the speakers, the turntable, the roof…everything. As you move from one part of the exhibition to the next it has an affect on you. And not in that airy-fairy arts critic kind of way.

I genuinely found I relaxed as I moved from the really packed and loud red “zone” to the blue “zone”. I felt a bit relieved to be out of the angry red part of the exhibition. No reflection on the paintings however, I loved them all.

But, the colours really do change your mood as you wander around. I’m not sure if this was the point, but it goes to show how the space and the art combined well. 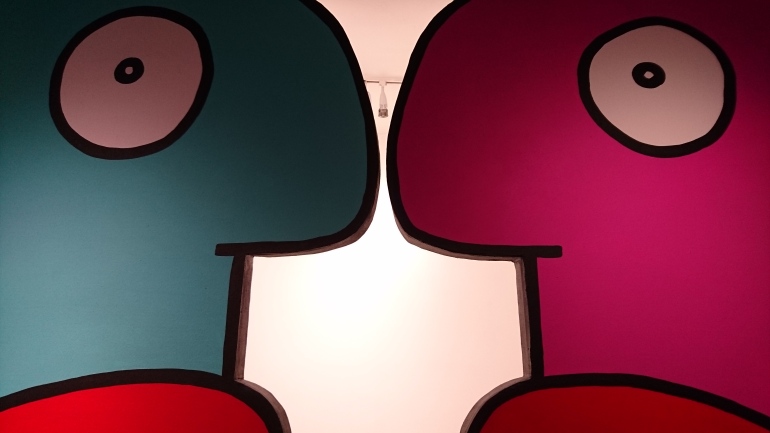 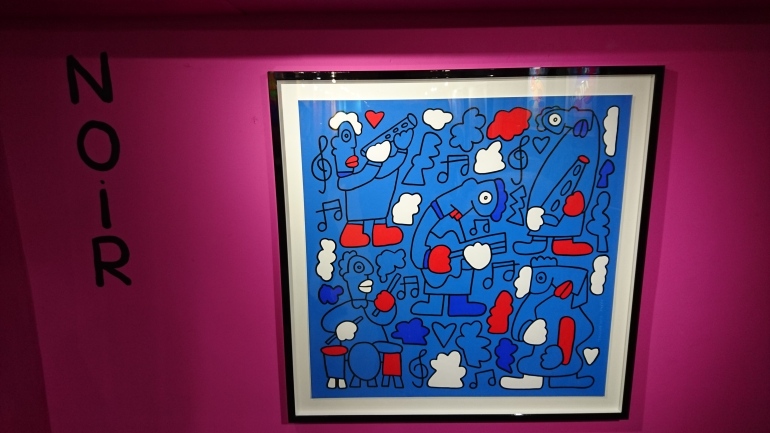 Among some of the most interesting pieces were the giant iconic heads that were once the staple of a trip along the west side of the Berlin wall, and the collaborative pieces from John Dolan and Thierry.

Especially relevant in this space as the two artists were among the very first to exhibit in the gallery in 2014, along with Phlegm. I like the collision of the more intricate monochrome illustration of John’s and the minimal, in your face bold and bright work of Thierry.

Also worth mentioning are the giant sized sculptures created in collaboration with Chris Tsonias too. Effectively they allow you to walk around his, usually two dimensional, characters. For an art nerd and general embarrassing fanboy like me, that’s a lot of fun.

It all kicks off in full later this month, with an opening party featuring Seth Troxler (a massive fan of Thierry’s) and these mega bottles of liquor to be opened on the occasion. I hope it’s well attended as if they intend on making their way through all of these, there’ll be some cataclysmic hangovers lying in wait.

In short, if like me you are a fan of Thierry’s work, this exhibition is unmissable. It’s a bit like stepping into one of his paintings. His connection to the Cold War era appeals to my Berlinophile sensibility, so this one was always going to be a winner for me.

For those uninitiated, there would be fewer better introductions to his work, and the art of the “street art” exhibition.

Go check it out, now!